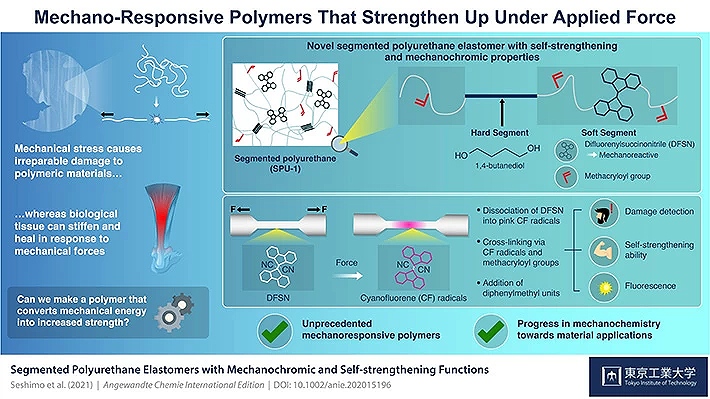 Scientists at Tokyo Institute of Technology (Tokyo Tech) developed a polymer whose properties change markedly after being exposed to mechanical stress. In bulk form, the mechano-responsive polymer shows color changing, fluorescence, and self-strengthening abilities even under simple compression or extension. These fundamental findings are unprecedented in the field of mechanochemistry and could pave the way for numerous applications in materials science.

A fascinating and crucial ability of biological tissue, such as muscle, is self-healing and self-strengthening in response to damage caused by external forces. Most human-made polymers, on the other hand, break irreversibly under enough mechanical stress, which makes them less useful for certain critical applications like manufacturing artificial organs. But what if we could design polymers that reacted chemically to mechanical stimuli and used this energy to enhance their properties?

This goal, which has proven to be a big challenge, is under the spotlight in the field of mechanochemistry. In a recent study published in Angewandte Chemie International Edition, a team of scientists from Tokyo Tech, Yamagata University, and Sagami Chemical Research Institute, Japan, made remarkable progress with bulk self-strengthening polymers. Professor Hideyuki Otsuka, who led the study, explains their motivation: “Furthering the development of elegant bulk systems in which a force-induced reaction causes a clear change in mechanical properties would represent a game-changing advance in mechanochemistry, polymer chemistry, and materials science.” They achieved this goal by focusing on difluorenylsuccinonitrile (DFSN), a ‘mechanophore’ or molecule that responds to mechanical stress.

The team created segmented polyurethane polymeric chains with hard as well as soft functional segments. The soft segments contain DFSN molecules acting as their “weakest link,” with both of its halves joined by a single covalent bond. The soft segments also have their side chains topped off with methacryloyl units. Upon applying mechanical stress, such as simple compression or extension, on the polymer, the DFSN molecule splits into two equal cyanofluorene (CF) radicals. These CF radicals, unlike DFSN, acquire a pink color, making it easy to visually detect mechanical damage.

Most importantly, the CF radicals react with the methacryloyl units in the side chains of other polymers, causing separate polymers to chemically hook to one another in a process known as cross-linking. This phenomenon ultimately makes the overall strength of the bulk material go up as polymers become more chemically intertwined. This chemical cross-linking effect, as the scientists proved experimentally, becomes more pronounced as more compression cycles are performed on the segmented polymer samples because more DFSN molecules are split into CF radicals.

In addition, the team created a slight variant of their segmented polymer that not only turns pink but also exhibits fluorescence under ultraviolet irradiation when mechanical force is applied to it. This functionality comes in handy when trying to more accurately quantify the extent of the damage done by mechanical stress.

The attractive properties and functionalities of the developed polymers are useful, for example, for intuitive damage detection and the creation of adaptive materials. Expressing excitement for their findings, Otsuka remarks: “We successfully developed unprecedented mechanoresponsive polymers that exhibit color change, fluorescence, and self-strengthening ability, marking the first report of force-induced cross-linking reactions achieved by simply the extension or compression of a bulk film. Our findings represent a significant advance in the fundamental research of mechanochemistry and its applications in material science.”

As more mechano-responsive materials with unique functions are developed, we can expect to explore their myriad applications in various industrial and engineering fields. Be sure to keep an eye out for further progress in mechanochemistry!

Featured image: Segmented polyurethanes (SPUs) that contain di-fluorenyl succinonitrile (DFSN) moieties and methacryloyl groups were synthesized. The obtained elastomers generated pink cyanofluorene radicals and changed color by compression or extension. This is the first example of force-induced cross-linking reactions achieved by only the extension or compression of a bulk film. © Tokyo Tech

Provided by Tokyo Institute of Technology