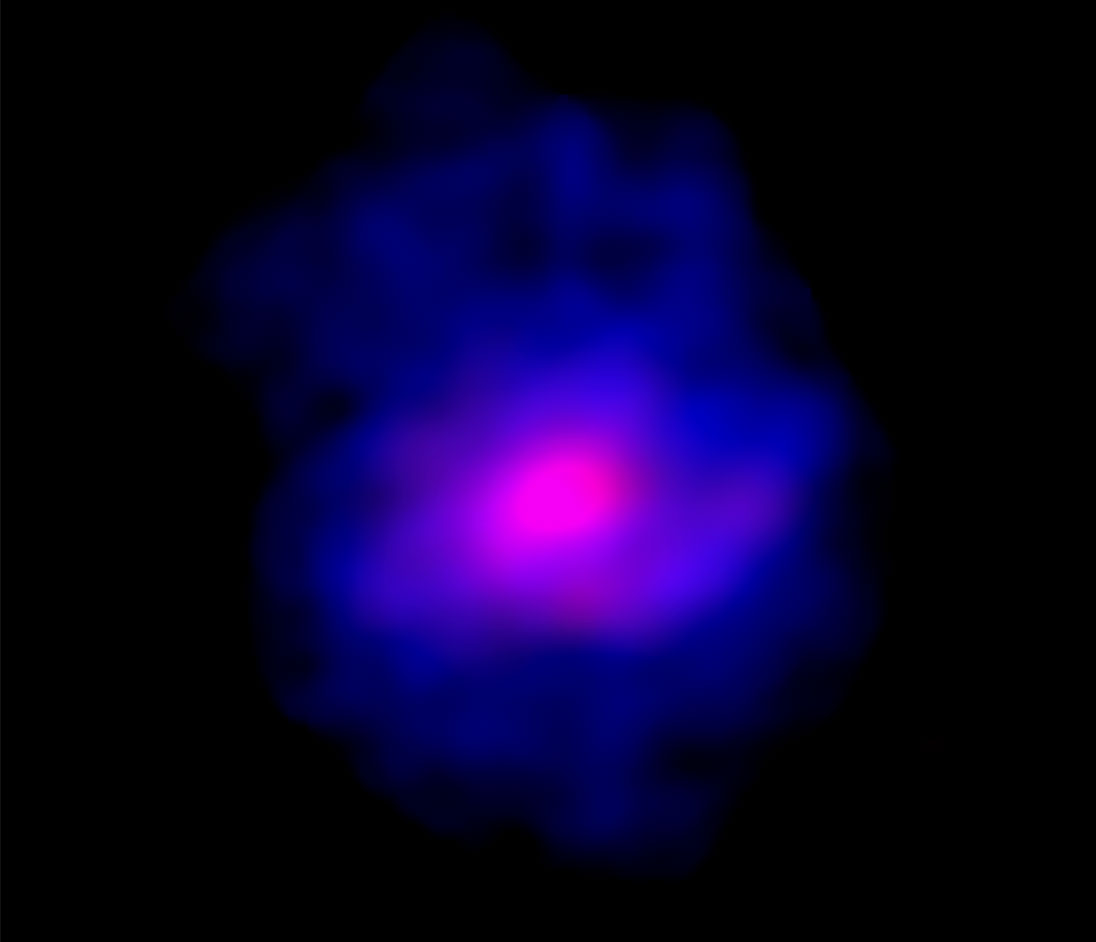 Scientists, including a researcher at the University of British Columbia, are challenging our current understanding of how galaxies form by unveiling pictures of a young galaxy in the early life of the Universe which appears surprisingly mature.

The galaxy, dubbed ALESS 073.1, appears to have all of the features expected of a much more mature galaxy and has led the team of scientists to question how it grew so fast. The research was published today in Astrophysical Journal.

Galaxies come in a variety of shapes, sizes and colours, and are made up of different components such as rotating disks, spiral arms, and “bulges”. A major goal of present-day astronomy is understanding why different galaxies look the way they are today and when their different components formed.

“We discovered that a massive bulge, a regular rotating disk, and possibly spiral arms were already in place in this galaxy when the Universe was just 10% of its current age,” said lead author Dr. Federico Lelli, who conducted the research while at Cardiff University’s School of Physics and Astronomy and now works at the Arcetri Astrophysical Observatory in Florence. “In other words, this galaxy looks like a grown adult, but it should be just a little child. It defies our understanding of galaxy formation.”

The team, led by scientists at Cardiff University, used the Atacama Large Millimeter/submillimeter Array (ALMA) telescope as a ‘time machine’ to peer into the remote past, revealing how ALESS 073.1 looked just 1.2 billion years after the Big Bang. ALMA is an astronomical facility run by an international partnership including Canada, the United States, Europe, Japan, South Korea, Taiwan and Chile.

Because the light emitted from the galaxy took billions of years to reach our telescopes on Earth, the team were able to explore how the galaxy looked during its infancy and determine how it was initially formed.

The result was one of the sharpest, direct images of a primordial galaxy ever produced which allowed the team to undertake a detailed study of its internal structure.

Bulges in the galaxy

One key feature of a galaxy is the presence of a so-called bulge – a tightly packed group of stars usually situated within the centre of the galaxy.

It was believed that massive bulges formed slowly by the merger of smaller galaxies or by specific processes that occurred within the galaxy itself; however, the kinematic properties of ALESS 073.1 have revealed that the formation of massive bulges can occur extremely fast – around half of the stars in the galaxy were shown to be in a bulge.

“This work shows that bulges can form rapidly, counter to the expectation that they build up slowly over time,” said study co-author Dr. Allison Man, an assistant professor in the department of physics and astronomy at UBC. “It will be important to understand if bulges are more common than thought in the young Universe.”

Some mature galaxies, like our own Milky Way, have been known to have spiral arms extending from their central parts, giving them a distinctive spiral shape. Similar features were also unexpectedly spotted in ALESS 073.1, much to the team’s amazement, as early galaxies are generally thought to be chaotic and turbulent rather than having regular, well-organized structures like spiral arms.

“ALESS 073.1 is undergoing vigorous episodes of star formation and supermassive black hole growth. That makes its regular rotation all the more remarkable, as if it’s not influenced by the fireworks within it,” Dr. Man said. “The findings open up many questions about primordial galaxies, including how often they merge with each other and how supermassive black holes interact with the galaxies they are in.”

Provided by University of British Columbia