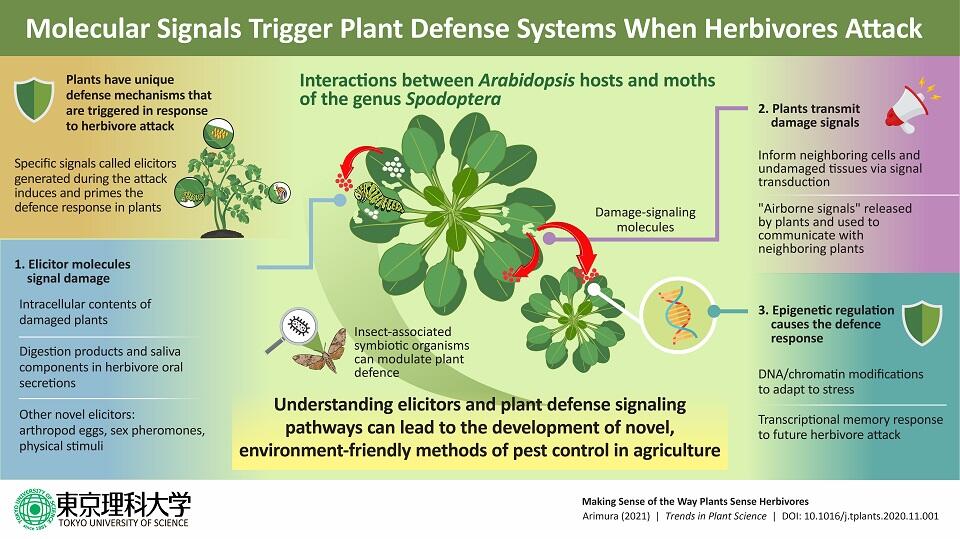 How “elicitors” can initiate defense responses in plants against herbivores, and can potentially lead to development of pesticide-free agriculture

Plants are known to possess solid immune response mechanisms. One such response is “sensing” attack by herbivorous animals. In a new review article, Prof. Arimura from Tokyo University of Science, Japan, discusses “elicitors”－the molecules that initiate plant defense mechanisms against herbivore attack. He highlights the major types of elicitors and the underlying cellular signaling, and states that this could spur research on organic farming practices that could prevent the use of harmful pesticides.

Nature has its way of maintaining balance. This statement rightly holds true for plants that are eaten by herbivores－insects or even mammals. Interestingly, these plants do not just silently allow themselves to be consumed and destroyed; in fact, they have evolved a defense system to warn them of predator attacks and potentially even ward them off. The defense systems arise as a result of inner and outer cellular signaling in the plants, as well as ecological cues. Plants have developed several ways of sensing damage; a lot of these involve the sensing of various “elicitor” molecules produced by either the predator or the plants themselves and initiation of an “SOS signal” of sorts.

In a recently published review in the journal Trends in Plant Science, Professor Gen-ichiro Arimura from Tokyo University of Science, Japan, encapsulates the research on the herbivory-sensing mechanism of plants through elicitors,. Commenting of the immense value of these elicitors, Prof. Arimura states, “This review focuses mainly on elicitors because they are timely, novel, and have potential biotechnological applications”.

When the same herbivorous animal comes to eat the plant multiple times, the plant learns to recognize its feeding behavior and records the “molecular pattern” associated with it. This is termed “herbivore-associated molecular patterns” or HAMPs. HAMPs are innate elicitors. Other plant elicitors include plant products present inside cells that leak out because of the damage caused by herbivory. Interestingly, when an herbivorous insect eats the plant, the digestion products of the plant cell walls and other cellular components become part of the oral secretions (OS) of the insect, which can also function as an elicitor!

Prof. Arimura highlights the fact that with the advancement of high-throughput gene- and protein-detecting systems, the characterization of elicitors of even specific and peculiar types of herbivores, such as those that suck cell sap and do not produce sufficient amounts of OS, has become possible. The proteins present in the salivary glands of such insects could be potential elicitors as they enter the plant during feeding. He explains, “RNA-seq and proteomic analyses of the salivary glands of sucking herbivores have led to the recent characterization of several elicitor proteins, including a mucin-like salivary protein and mite elicitor proteins, which serve as elicitors in the leaves of the host plants upon their secretion into plants during feeding.”

The review also highlights some peculiar elicitors like the eggs and pheromones of insects that plants can detect and initiate a defense response against. In some special cases, the symbiotic bacteria living inside the insect’s gut can also regulate the defense systems of the plants.

And now that we have understood different types of elicitors, the question remains－what signaling mechanisms do the plants use to communicate the SOS signal?

So far, it has been hypothesized that the signaling is made possible by proteins transported through the vascular tissue of plants. Interestingly, there is evidence of airborne signaling across plants, by a phenomenon called “talking plants.” Upon damage, plants release volatile chemicals into the air, which can be perceived by neighboring plants. There is also evidence of epigenetic regulation of defense systems wherein plants maintain a sort of “genetic memory” of the insects that have attacked them and can fine-tune the defense response accordingly for future attacks.

Given the improvement in knowledge of the mechanisms of plant defense systems, we can embrace the possibility of a “genetic” form of pest control that can help us circumvent the use of chemical pesticides, which, with all their risks, have become a sort of “necessary evil” for farmers. This could usher in modern, scientifically sound ways of organic farming that would free agricultural practices from harmful chemicals.

Provided by Tokyo University of Science