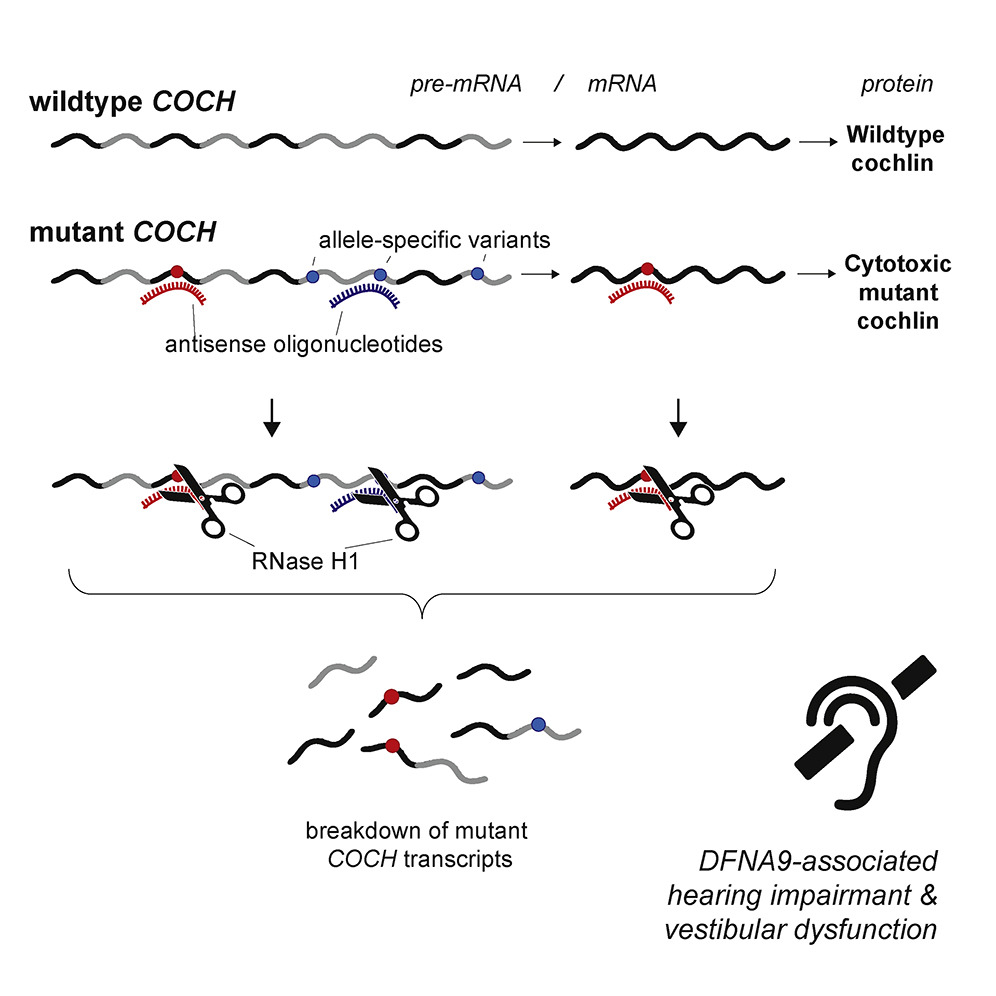 They can hear well up to about forty years old, but then suddenly deafness strikes people with DFNA9. The cells of the inner ear can no longer reverse the damage caused by a genetic defect in their DNA. Researchers at Radboud university medical center have now developed a “genetic patch” for this type of hereditary deafness, with which they can eliminate the problems in the hearing cells. Further research in animals and humans is needed to bring the genetic patch to the clinic as a therapy.

Hereditary deafness can manifest itself in different ways. Often the hereditary defect (mutation) immediately causes deafness from birth. Sometimes, as with DFNA9, you experience the initial problems in hearing after forty, fifty, sixty years. This has everything to do with the way DFNA9 mechanistically works. Every person gets half of his genes from his father and the other half from his mother. If you have two healthy copies of the DFNA9 gene, your inner ear works normal. If you receive a mutated copy of the gene from either your father or mother, deafness will develop later in life.

Erik de Vrieze and Erwin van Wijk, both researchers at Hearing & Genes of the department of Ear, Nose and Throat, have conducted extensive research into the condition. De Vrieze: “We now know that you actually produce enough of the associated DFNA9 protein with just one healthy gene copy to be able to hear well for life. But there is a catch with this condition. The mutated protein is, in a way, disturbing the function of the healthy protein. It sticks to it, so that the healthy protein can also no longer do its job. This clumped protein spaghetti is constantly being removed by the cells of the inner ear, but after decades the clean-up service in these cells is reaching its limit and can no longer cope with these protein clumps. A threshold value is exceeded. As a result, the waste accumulates, the hearing cells start to function poorly and even die over time. After years of normal hearing, DFNA9 patients suddenly notice that their hearing is deteriorating, and sometimes deteriorating very quickly. Until at some point they will become deaf. “

The specific DFNA9 mutation seems to originate from a common ancestor in the Southern Netherlands, somewhere at the end of the Middle Ages. This can more or less be deduced from the spread of the fairly unique clinical manifestation, which is now estimated to occur in about 1500 people in the (southern) Netherlands and Belgium. Perhaps even more important than the origin of the disease is whether or not anything can be done about it. Van Wijk: “This condition has two favorable characteristics for therapy development. Firstly, it is a hereditary condition that only manifests itself after a few decades in life. In case an effective treatment will become available for this disease, a sufficiently large timeframe is available to apply it before the hearing loss really strikes. “

The other point – developing an effective therapy – is a bit more complicated, but offers good starting points. Van Wijk: “The idea is that by specifically turning off the mutated gene copy you can prevent deafness. Without this mutated gene copy, no mutant protein will be produced and protein clumping will no longer take place. In addition, one healthy gene copy alone produces enough protein to maintain good hearing. “

De Vrieze and Van Wijk further developed this idea. Together with colleagues, they have now published the research results in the scientific journal Molecular Therapy – Nucleic Acids. “Genes, that reside on our DNA, provide the genetic code for the translation process into proteins,” says De Vrieze. “To get from a gene to a protein, you always need a translation process via so-called messenger RNA. And that is exactly the process we focused on. The unique DNA error in the DFNA9 gene is also reflected in the RNA. We developed a small piece of RNA that specifically binds to the messenger RNA derived from the mutated DFNA9 gene. As a result, the entire mutated messenger RNA is targeted for degradation. In this way, an essential link is lost and the mutant DFNA9 protein is no longer or hardly produced. The piece of RNA that we stick on the mutated DFNA9 messenger RNA is named an antisense oligonucleotide or “genetic patch”.

In recent years, De Vrieze and Van Wijk have not only developed this genetic patch, but also investigated its effect in cultured cells. Their current article is mainly describing these results, as the approach works in cultured cells. So there is a “proof of concept”, as it is called in science. In short, the research shows that the approach works at the cellular level.

Arthur Robbesom of the “The Ninth of …” DFNA9 Foundation is delighted with the study. “This offers a real perspective for about 1,500 people in the Netherlands and Belgium who are suffering from this condition. “The foundation is also closely involved in this research. Robbesom:” Now it is important to take the next necessary steps in the research as soon as possible. We will wholeheartedly support you.”