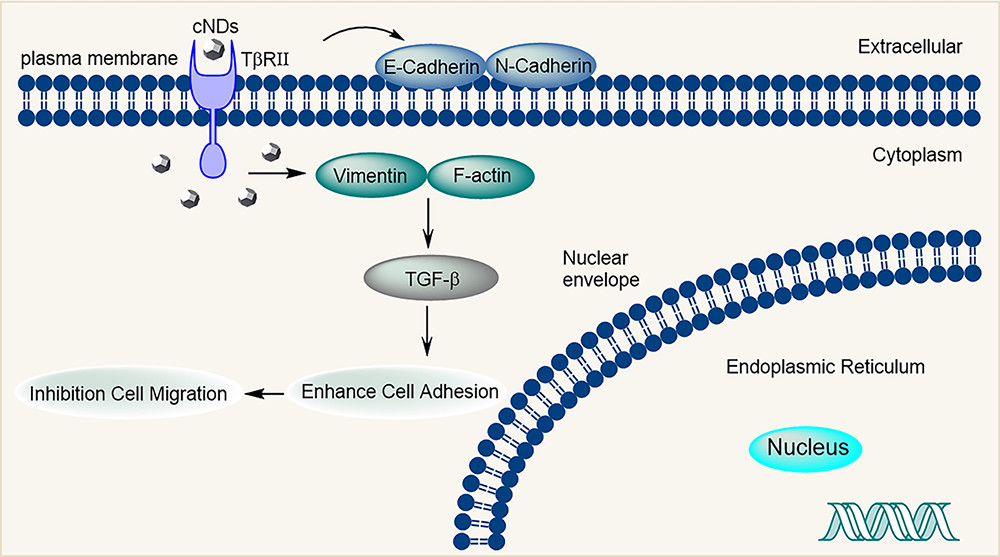 Chinese scientists have recently investigated that carboxylated nanodiamonds (cNDs) could promote the adhesion of tumor cells to the underlying substrate, and motility of tumor cells are therefore limited. The cNDs materials are highly possible to be applied in future cancer treatment. The new study, published in ACS Applied Materials & Interfaces, was conducted by Prof. ZHI Jinfang’s team from the Technical Institute of Physics and Chemistry (TIPC) of the Chinese Academy of Sciences (CAS).

Cancer treatment remains a major problem currently in the field of medicine. While the metastasis of cancer cells is one of the most common causes of death among cancer patients. Because the mechanism on tumor cell migration is complicated and unacquainted.

The research group led by Prof. ZHI has studied application of cancer treatment based on NDs materials system since 2010. In their previous works, the proliferation of Hela cells is found reduced in acidic environment under NDs-cisplatin system. They also prepared NDs by high pressure high temperature method to make an effect on HepG2 cells migration.

“We would like to focus on the restrained mechanism of cancer cells migration with the effect of cNDs this time,” said ZHI et al.

F-actin staining experiments demonstrated that cNDs treatment could impair assembly of the F-actin cytoskeleton, reduce the formation of stress fibers and lamellipodia, and then inhibit tumor cell migration. The in vivo pulmonary metastasis model also showed that cNDs effectively reduced the metastasis of murine B16 melanoma cells.

These results elucidated that cNDs could play an active role in mediating biological effects besides just act as drug carriers and cell probes.

“Thanks to Prof. Yasuaki Einaga from Keio University. He provided plenty of guidance on the experimental design and mechanism analysis of this work,” said Prof. ZHI.

This work was supported by the National Natural Science Foundation of China, the International Partnership Program of CAS and the Open Research Fund of State Key Laboratory of Bioelectronics, Southeast University.