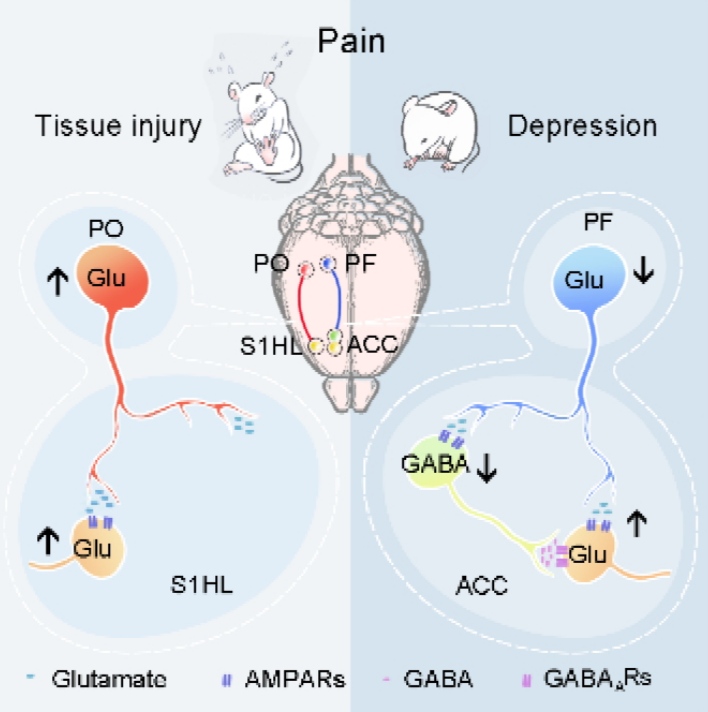 Clinically, multiple lines of evidence show that chronic pain and depressive symptoms are frequently encountered. Patients suffered from both pain and depression are likely to become insensitive to drug treatment, indicating a refractory disease. The neural mechanism under this comorbidity remains unclear.

In a study published in Nature Neuroscience, the research team led by Prof. ZHANG Zhi and Dr. LI Juan from the University of Science and Technology of China (USTC) of the Chinese Academy of Sciences (CAS), reported the discrete thalamocortical circuits underlying the pain symptom caused by tissue injury and depression-like states.

Being the gateway towards cerebral cortex and considered as the major source of ‘nociceptive neurons’ at the highest level of the nervous system in anesthetized animals, the thalamus integrates physical signals of emotions and pains and projects them to the cortex through thalamocortical structure for differentiating and processing. Thus, the thalamocortical circuits for pain processing is a hot spot in research.

Interestingly, for mice in depression-like states, who also displayed significant allodynia, regulation of the PO -> S1 circuit failed to take effect. What mediates the depression associated pain sensitization is another pathway from the parafascicular thalamic nucleus (PF) to anterior cingulate cortex (ACC).

These results provide a new insight into the pathogenesis of physical pain.

The novel understanding of the neural circuit may add to the precision of these targeting therapy strategies in clinical use as physical intervention of specific brain regions or neural circuits is the current treatment option toward drug-insensitive neurological diseases.