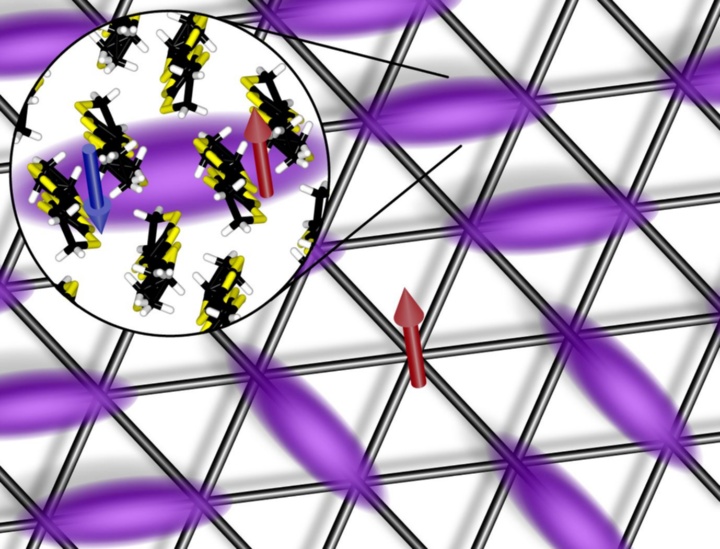 A quantum spin liquid is a state of matter in which interacting quantum spins do not align even at lowest temperatures, but remain disordered. Research on this state has been going on for almost 50 years, but whether it really exists has never been proven beyond doubt. An international team led by physicist Prof. Martin Dressel at the University of Stuttgart has now put an end to the dream of a quantum spin liquid for the time being. Nevertheless, the matter remains exciting.

When temperatures drop below zero degrees Celsius, water turns to ice. But does everything actually freeze if you just cool it down enough? In the classical picture, matter inherently becomes solid at low temperatures. Quantum mechanics can, however, break this rule. Therefore, helium gas, for example, can become liquid at -270 degrees, but never solid under atmospheric pressure: There is no helium ice.

The same is true for the magnetic properties of materials: at sufficiently low temperatures, the magnetic moments known as ‘spins’, for example, arrange themselves in such a way that they are oriented opposite/antiparallel to their respective neighbors. One can think of this as arrows pointing alternating up and down along a chain or in a checkerboard pattern. It gets frustrating when the pattern is based on triangles: While two spins can align in opposite directions, the third is always parallel to one of them and not to the other – no matter how you turn it.

For this problem, quantum mechanics suggests the solution that the orientation and bond of two spins are not rigid, but the spins fluctuate. The state formed is called a quantum spin liquid in which the spins constitute a quantum mechanically entangled ensemble. This idea was proposed almost fifty years ago by the American Nobel laureate Phil W. Anderson (1923-2020). After decades of research, only a handful of real materials remain in the search for this exotic state of matter. As a particularly promising “candidate” a triangular lattice in a complex organic compound was considered, in which no magnetic order with a regular up-down pattern could be observed, even at extremely low temperatures. Was this the proof that quantum spin liquids really exist?

Pairs instead of quantum liquid

One problem is that it is extremely challenging to measure electron spins down to such extremely low temperatures, especially along different crystal directions and in variable magnetic fields. All previous experiments have been able to probe quantum spin liquids only more or less indirectly, and their interpretation is based on certain assumptions and models. Therefore, a new method of broadband electron spin resonance spectroscopy has been developed over many years at the Institute of Physics 1 at the University of Stuttgart.

Using on-chip microwave lines, one can directly observe the properties of the spins down to a few hundredths of a degree above absolute zero. In doing so, the researchers found that the magnetic moments do not arrange themselves in the up-down pattern of a typical magnet, nor do they form a dynamic state resembling a liquid. “In fact, we observed the spins in spatially separated pairs. Thus, our experiments have shattered the dream of a quantum spin liquid for now, at least for this compound,” summarizes Prof. Martin Dressel, head of the Institute of Physics 1.

But even though the pairs did not fluctuate as hoped, this exotic ground state of matter has lost none of its fascination for the physicists. “We want to investigate whether quantum spin liquids might be detectable in other triangular lattice compounds or even in completely different systems such as honeycomb structures”, Dressel outlines the next steps. However, it could also be that such a disordered, dynamic state simply does not exist in nature. Perhaps every kind of interaction leads in one way or another to a regular arrangement if the temperature is low enough. Spins just like to pair up.

Featured image: Arrangement of the spins in a triangular lattice: Two spins each form a pair, whereby their magnetic moments cancel each other out when viewed from the outside.Photo: University of Stuttgart, PI 1

Provided by University of Stuttgart