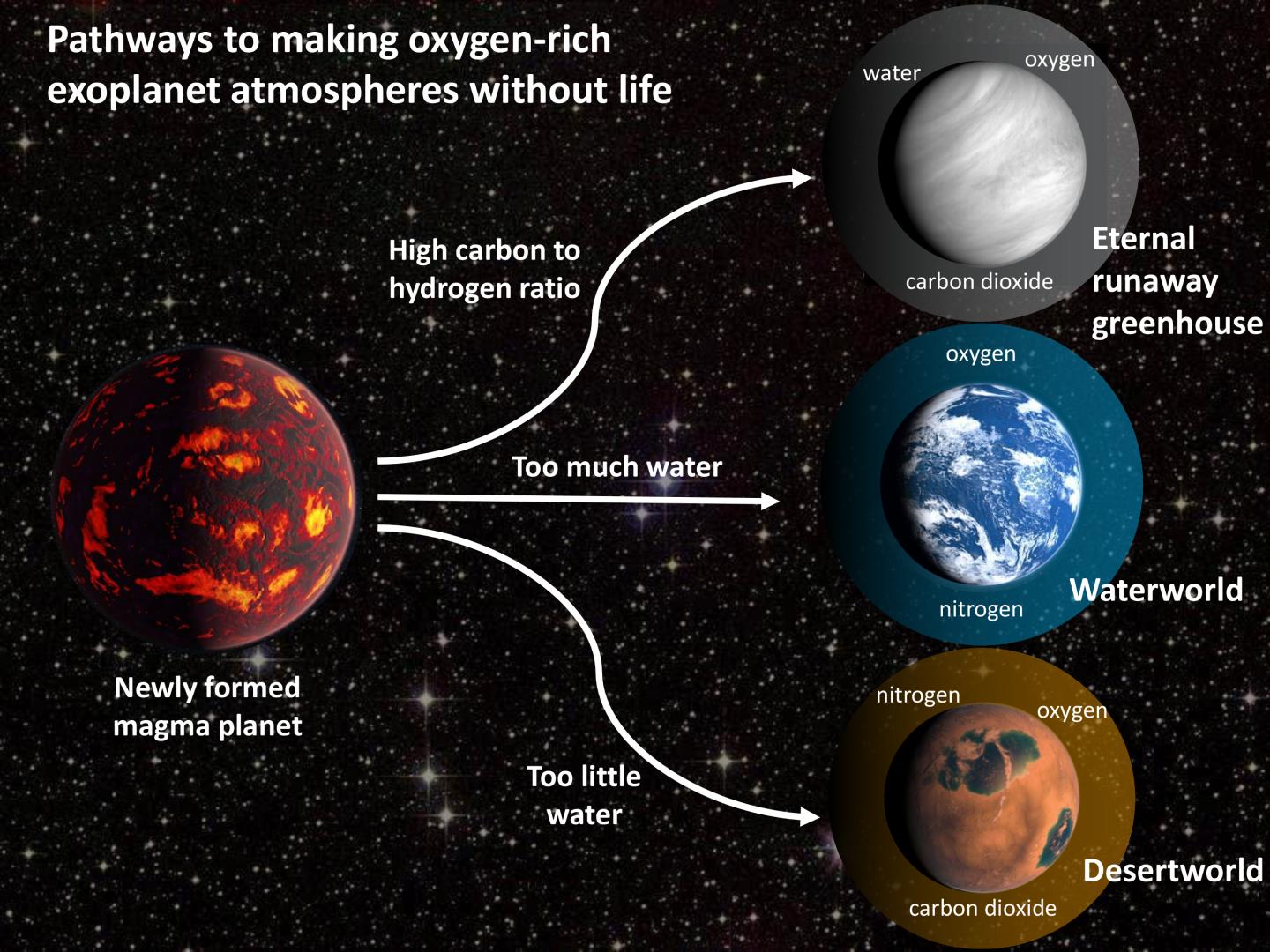 According to a recent study, conducted by a team of researchers using evolutionary computational models, rocky planets found in the habitable zones of Sun-like stars can contain oxygen of non-biological origin in their atmospheres, making its spectral detection a biological signature. not very reliable and certainly not sufficient to affirm the presence of life forms. All the details on Agu advances

The presence of oxygen in the atmosphere of an exoplanet could be an unreliable biological signature : this is what emerges from a new study conducted by teams of researchers led by the University of California at Santa Cruz (Ucsc).

The researchers based their discovery on a thermo-geochemical-climatic computational model that made it possible to study the evolution of the atmosphere of terrestrial planets by varying the initial inventory of the volatile chemical compounds present in it. The results obtained, published yesterday in the journal Agu Advances, show three different scenarios in which a rocky planet around a star similar to the Sun – after 4.5 billion years of evolution, corresponding to the age established for the Earth – can develop atmospheres rich in oxygen of abiotic origin, i.e. coming from non-biological activity, which would make any detection of the molecule’s spectral signature – if interpreted as a biosignature – a false positive.

The research, explains Joshua Krissansen-Totton , researcher at the University of Santa Cruz and first author of the publication, “shows that there are several ways to produce oxygen in the atmosphere without this indicating the presence of life, but there are other observations that they can do to help distinguish these false positives from the true signal ».

In the coming decades, perhaps as early as the late 1930s, astronomers will have telescopes capable of acquiring images and absorption spectra of molecules in potentially Earth-like planets around Sun-like stars. researchers, is to point telescopes towards these worlds where life may have emerged and characterize their atmospheres. But the false positive detections are, in fact, a problem.

“There has been a lot of discussion about considering the detection of ‘sufficient’ oxygen as a sign of life,” notes Jonathan Fortney , also from the University of Santa Cruz and co-author of the study. «This work highlights the need to know the context of the surveys. What molecules are found besides oxygen and what does this tell us about the evolution of the planet? ».

Oxygen can be produced in a planet’s upper atmosphere by high-energy ultraviolet light that splits water molecules into its components: hydrogen and, indeed, oxygen, the researchers say. The lighter hydrogen is lost in space, leaving behind oxygen, which thus accumulates. But there are also processes that can remove oxygen from the atmosphere: carbon monoxide and hydrogen released by outgassing from molten rock, for example, react with oxygen reducing its quantities. And the atmospheric agents that erode the rock also absorb the molecule. These are some of the processes the researchers incorporated into their model to study the evolution of a rocky planet.

The scenarios that these evolutionary models have returned, in which the atmospheres contained oxygen of abiotic origin, are three, we said. A fourth scenario, in which the soup of volatile gases inserted is what is thought to be the early Earth, has never produced oxygen of such an origin.

“If you run the model for the Earth, by inserting what we think is the initial inventory of volatile compounds, you get the same result every time: without life, no oxygen is produced in the atmosphere,” says Krissansen-Totton. “But we also found several scenarios in which it is possible to obtain oxygen without the presence of life.”

The first scenario that the authors describe in the publication is that in which the initial conditions of planetary formation are similar to those of the Earth but with a quantity of carbon dioxide greater than water (CO2 / H2O ratio greater than 1). This results in a constant and high greenhouse effect which, by making the planet very hot, prevents water vapor from condensing on the planet’s surface. The result is the constant atmospheric presence of water in the gaseous state available to the action of UV light which, as mentioned, splits it into hydrogen and oxygen.

“In this scenario, similar to that of Venus, all volatile molecules are in the atmosphere,” says Krissansen-Totton. “Few remain in the mantle to be degassed and prevent the formation of oxygen.”

The second and third scenarios also start from conditions similar to those of the Earth, but while in the first case the input is a quantity of water from 10 to 230 times greater than that present on our planet, in the second it is 0.3 times the quantity of water on Earth.

For water-rich worlds, the researchers explain, deep oceans exert tremendous pressure on the planetary crust. This effectively disrupts geological activity, including some processes such as melting or erosion of rocks that would remove oxygen from the atmosphere.

In the case of desert worlds, however, the surface magma of the initially molten planet can freeze rapidly, while water, albeit little, remains in the atmosphere, allowing, as it is split, the accumulation of oxygen and the escape of hydrogen. .

“The typical sequence is that the solidification of surface magma occurs simultaneously with the condensation of water in the surface oceans,” adds Krissansen-Totton. “On Earth, once the water condensed on the surface, the escape rates were low. But if water vapor still remains in the atmosphere after the molten surface has solidified, there is a window of about a million years in which oxygen can accumulate, because no molten surface can consume the oxygen produced by the leak. of hydrogen “.

The scenarios outlined in this study emphasize that no single observation, including the detection of oxygen on planets in habitable areas around Sun-like stars, can be an unambiguous sign of the presence of life, the researchers conclude. The evaluation of biosignatures should be a systemic approach, in which the biological origin of a molecule is judged by the presence of multiple lines of evidence.

Featured image: Artistic illustration showing the paths through which the atmospheres of planets orbiting stars similar to the Sun can be enriched with oxygen of non-biological origin. Credits: J. Krissansen-Totton.