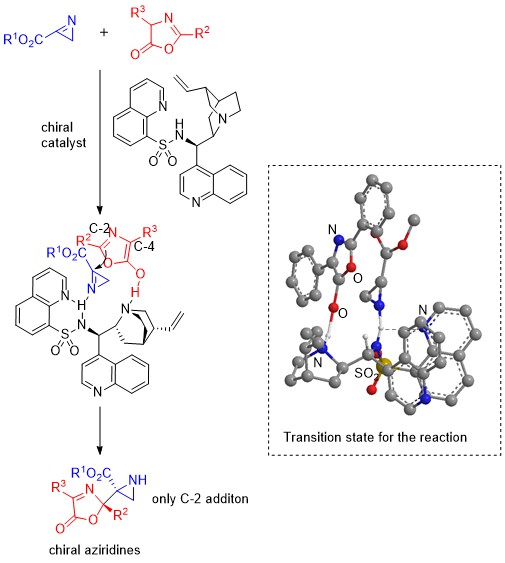 Unless you’ve studied chemistry in college, it’s unlikely you’ve come across the name aziridine. An organic compound with the molecular formula, C2H4NH, aziridines are well-known among medicinal chemists, who make use of the compound to prepare pharmaceutical drugs such as Mitomycin C, a chemotherapeutic agent known for its anti-tumor activity. Specifically, aziridines are what chemists call “enantiomers”ーmolecules that are mirror images of each other and cannot be superposed on one another. A peculiarity with enantiomers is that the biological activity of one is different from its mirror image and only one of them is desirable for making drugs. Chemists, therefore, regularly opt for “asymmetric” or “enantioselective” synthesis techniques that yield the desired enantiomer in greater amounts.

One such technique that has recently attracted attention from the viewpoint of pharmaceutical synthesis involves the use of oxazolonesーchemical compounds with the molecular formula C3H3NO2ー to prepare aziridines. “Oxazolones are well-known for their versatility in affording biologically active compounds,” explains Professor Shuichi Nakamura from Nagoya Institute of Technology (NITech), Japan, who studies asymmetric reactions, “However, the enantioselective reactions of 2H-azirines with oxazolones have not been very fruitful, despite being touted as one of the most efficient methods to synthesize aziridines.“

In a new study recently published in Organic Letters, Prof. Nakamura along with his colleagues from NITech and Osaka University, Japan, explored this issue and, in a significant breakthrough, managed to obtain aziridine-oxazolone compounds in high yields (99%) as well as high enantioselectivity or purity (98%). In addition, the team used an original catalyst they developed to catalyze the reactions they studied.

The team started off by heating α-azideacrylates at 150°C in an organic solvent tetrahydrofuran (THF) to prepare 2H-azirines and then reacted them with oxazolones in presence of various organocatalysts to produce different aziridine-oxazolone compounds. In particular, the team examined the effect of the catalyst cinchonine and various heteroarenecarbonyl and heteroarenesulfonyl groups in organocatalysts derived from cinchona alkaloids and found that reactions using catalysts with either a 2-pyridinesulfonyl group or an 8-quinolinesulfonyl group gave both a high yield (81-99%) as well high enantiopurity (93-98%). In addition, scientists observed that the reaction between a 2H-azirine containing an ethyl ester group and an oxazolone with a 3, 5-dimethoxyphenyl group in presence of the catalyst with 8-quinolinesulfonyl group also gave high yields (98-99%) as well as enantiopurity (97-98%).

The team then moved on to exploring the reaction between 2H-azirine with ethyl ester group and a wider variety of oxazolones in presence of the catalyst with 8-quinolinesulfonyl group. In all of the reactions they observed high yields (77-99%) and enantiopurities (94-99%) except one for the case of an oxazolone bearing a benzyl group and the catalyst with 2-pyridylsulfonyl group that only produced a moderate yield (61%) and purity (86%). Moreover, they were able to convert the obtained aziridines into various other enantiomers without any loss of purity.

Finally, the team proposed a catalytic mechanism and a transition state for the reaction of 2H-azirines with oxazolones in which the catalyst activates both the oxazolone and the 2H-azirine, which then react to give an “addition product” that, in turn, yields the aziridine with regeneration of the catalyst.

While the detailed mechanism is yet to be clarified, scientists are excited by their findings and look forward to the method’s application in medicine and pharmacology. “It has the potential to provide people with new medicines and create new drugs as well as drug candidates that are currently difficult to synthesize. Moreover, the catalyst used in this study can be used for many other stereo-selective synthetic reactions,” observes an optimistic Prof. Nakamura.

Some fascinating consequences to contemplate for sure!

Provided by Nagoya Institute of technology