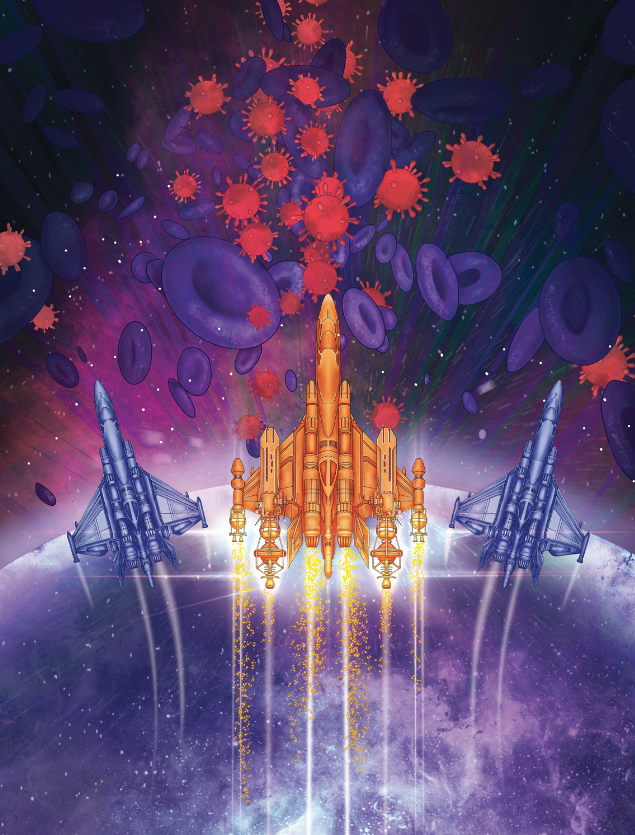 When researchers from Penn Medicine found that many patients with B-cell acute lymphoblastic leukemia (ALL) treated with the investigational chimeric antigen receptor (CAR) T cell therapy targeting the CD22 antigen didn’t respond, they went back to the drawing board to determine why. They discovered that less is more when it comes to the length of what is known as the single-chain variable fragment — the linker that bridges the two halves of the receptor that allows CAR T cells to latch onto tumor cells and attack them.

The findings are reported online today in Nature Medicine.

“A little difference of a few amino acids can make a huge difference for patients,” said co-senior author Marco Ruella, MD, an assistant professor of Medicine in the division of Hematology-Oncology in the  Perelman School of Medicine at the University of Pennsylvania and scientific director of the Lymphoma Program. “When we snipped 15 amino acids off the linker, the two halves of the CAR plastered together and pre-activated the CAR T cells.”

Developed at Penn Medicine in collaboration with Novartis, the anti-CD19-CAR T cell (Kymriah™) is currently approved by the U.S. Food and Drug Administration for the treatment of pediatric and young adults with relapsed/refractory ALL; however, long-term follow up shows a significant fraction of patients who achieve remission ultimately relapse, often when the leukemia cells lose expression of the CD19 antigen and elude the new immune system. Researchers at Penn and elsewhere have developed a second approach for this group of patients: CAR T cells that target the CD22 antigen, also found on B cells.

Two clinical pilot studies conducted at Penn and Children’s Hospital of Philadelphia with CAR-22 T cell therapy in six children and three adult patients with refractory/relapsed ALL showed overall poor clinical responses. Strikingly, those findings didn’t align with the positive results from a similar trial at the National Cancer Institute (NCI). So, the team investigated further and found the only difference between the two treatments was the length of the single-chain variable fragment. The NCI CAR was five amino acids in length, while the Penn/CHOP trial CAR was 20 amino acids in length.

The Penn team in collaboration with Novartis then built a new 41BB-based CAR-22 T cell with a shorter linker and compared it to the previous CAR in both mouse and human cell studies. 41BB is a different co-stimulatory signal, along with CD28, needed for CAR T cell activation and survival. They showed that the shorter linker on the CAR construct was, in fact, more successful at pre-activating CAR T cells so that their response to B cells and subsequent anti-tumor activity improved. Researchers have generally assumed that when T cells are pre-activated prior to seeing their target they become easily exhausted.

“This finding really turns the current dogma on its head,” said Saar I. Gill, MD, PhD, an assistant professor of Hematology-Oncology at Penn, who serves as co-senior author. “These days, most CARs come with one of two built-in turbo-charge systems: CD28 or 41BB. It turns out that the assumption was true only for CD28-stimulated CARs but not for the more commonly used 41BB-stimulated CARs. In fact, here we showed that the opposite is true.”

Nathan Singh, MD, who conducted the study while at Penn and is now an assistant professor of Medicine in the Division of Oncology at Washington University School of Medicine in St. Louis, is the first author.

“These findings were rather unexpected, given what’s been shown previously in the field,” Singh said. “They highlight that even small molecular changes can have dramatic impact on the function of these synthetic molecules. Most exciting is that these data reveal a previously hidden path to improve CAR T cell function in a methodical manner.”

The results from these studies have led to a new, ongoing clinical trial at Penn and CHOP in collaboration with Novartis for adult and pediatric patients with refractory/relapsed ALL investigating the shorter linker CAR. Additional studies are underway to determine if the length of linkers is important in other CAR T cells.

“Every CAR construct is different,” Gill said. “But these findings suggest we need to modify the length of the linker when we test a new CAR to make sure we are generating the best version of it.”

Editor’s Note: The University of Pennsylvania has licensed some technologies involved in these studies to Novartis. Some of the scientists involved in these trials are inventors of these technologies. As a result of the licensing relationship with Novartis, the University of Pennsylvania receives significant financial benefit, and some of these inventors have benefitted financially and/or may benefit financially in the future.