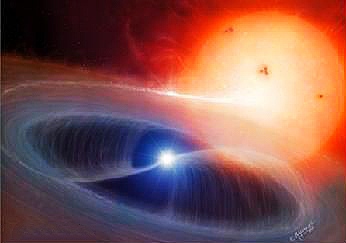 During and immediately after a nova eruption, the white dwarf’s luminosity is close to the Eddington limit. The companion is irradiated and heated to a surface temperature that is an order of magnitude hotter than its pre-eruption (main sequence) effective temperature. In 1988, Kovetz and colleagues studied the response of the companion to such irradiation and calculated the heat penetration into its atmosphere. They showed that as the heated layers expand, the donor overflows its Roche lobe more than in quiescence, and the mass transfer rate increases by orders of magnitude. Recently, Hillman and colleagues demonstrated that this irradiation-driven enhanced mass transfer may dominate the long term evolution of CVs over multiple nova cycles.

Now, Ginzburg and Quataert revisited the heating of the donor star by the hot white dwarf during and after a nova eruption using a combination of analytical arguments and experiments with the mesa stellar evolution code. They calculated the enhanced mass transfer rate following a nova and improve upon Kovetz et al. and Hillman et al. by refining their power-law scaling for how this rate depends on the irradiation temperature and on the donor’s mass. More importantly, they revise upwards the normalization of the mass transfer rate.

They first showed that a nova eruption irradiates and heats the donor star in a cataclysmic variable to high temperatures Tirr, causing its outer layers to expand and overflow the Roche lobe. They then, calculated the donor’s heating and expansion both analytically and numerically and found that irradiation drives enhanced mass transfer from the donor at a rate,

which reaches m• ∼ 10¯6 M yr¯1 at the peak of the eruption — about a thousand times faster than during quiescence. As the nova subsides and the white dwarf cools down, m• drops to lower values.

Finally, they concluded that whether or not a system reaches the self-sustaining state is sensitive to the donor’s chromosphere structure, as well as to the orbital period change during nova eruptions.

Note for editors of other websites: In order to reuse this article fully/partially kindly give credit to our author S. Aman or to us