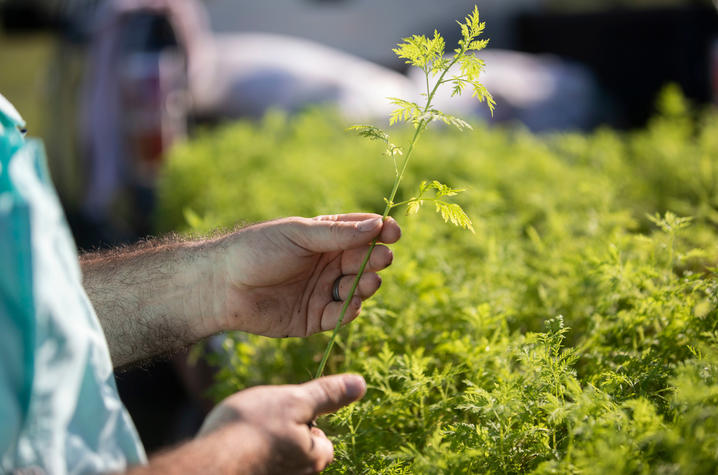 A new study from University of Kentucky Markey Cancer researchers shows that Artemisia annua, a plant that has been traditionally used for its anti-malaria components, shows promise in treating ovarian cancer.

Despite accounting for only 1.3% of all new cancer cases, 2.3% of cancer deaths in 2021 are predicted to be caused by ovarian cancer. The current standard of care for advanced ovarian cancer, which hasn’t changed since 2003, is the use of two chemotherapy agents: carboplatin and paclitaxel.

In this study, the researchers determined that artesunate, both alone and in combination with carboplatin and paclitaxel, has anticancer activity at concentrations that are achievable in the clinic, which support the further clinical development of this strategy.

“Artesunate is historically used as an anti-malarial but with emerging evidence, it demonstrates its anti-cancer activity,” said Jill Kolesar, PharmD, professor in the UK College of Pharmacy and administrative director of Markey’s Precision Medicine Clinic.  “This supports bringing it into the clinic and we hope to have positive outcomes for these patients, based on our preclinical data.”

Kentucky is the only state currently growing substantial quantities of Artemisia annua, meaning the Commonwealth could become a new epicenter for growing the plant worldwide. The plant’s growth process is similar to that of tobacco, potentially giving Kentucky’s tobacco farmers a new cash crop to supplement their incomes.

Artemisia annua is also grown at UK’s Spindletop Farm, where it is harvested primarily for research purposes within the College of Agriculture, Food and Environment and the College of Pharmacy.

“We’re growing Artemisia on Kentucky farms, studying it in our Kentucky lab, and now moving it into Kentucky clinics,” Kolesar said. “Potentially improving the economy of the state and developing a cancer treatment for your patients – that’s truly a dream.”

Provided by University of Kentucky