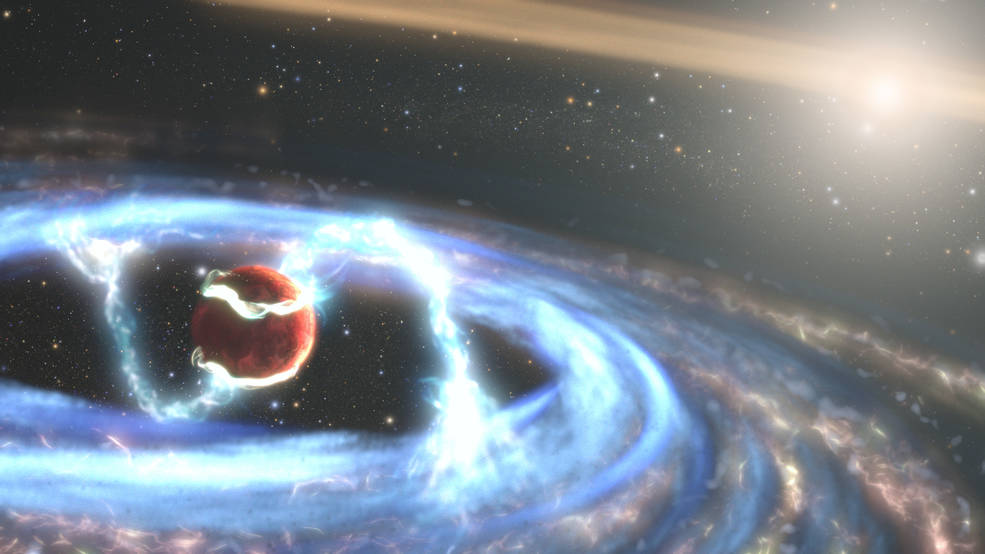 NASA’s Hubble Space Telescope is giving astronomers a rare look at a Jupiter-sized, still-forming planet that is feeding off material surrounding a young star.

“We just don’t know very much about how giant planets grow,” said Brendan Bowler of the University of Texas at Austin. “This planetary system gives us the first opportunity to witness material falling onto a planet. Our results open up a new area for this research.”

Though over 4,000 exoplanets have been cataloged so far, only about 15 have been directly imaged to date by telescopes. And the planets are so far away and small, they are simply dots in the best photos. The team’s fresh technique for using Hubble to directly image this planet paves a new route for further exoplanet research, especially during a planet’s formative years.

This huge exoplanet, designated PDS 70b, orbits the orange dwarf star PDS 70, which is already known to have two actively forming planets inside a huge disk of dust and gas encircling the star. The system is located 370 light-years from Earth in the constellation Centaurus.

“This system is so exciting because we can witness the formation of a planet,” said Yifan Zhou, also of the University of Texas at Austin. “This is the youngest bona fide planet Hubble has ever directly imaged.” At a youthful five million years, the planet is still gathering material and building up mass.

The UV observations, which add to the body of research about this planet, allowed the team to directly measure the planet’s mass growth rate for the first time. The remote world has already bulked up to five times the mass of Jupiter over a period of about five million years. The present measured accretion rate has dwindled to the point where, if the rate remained steady for another million years, the planet would only increase by approximately an additional 1/100th of a Jupiter-mass.

Zhou and Bowler emphasize that these observations are a single snapshot in time – more data are required to determine if the rate at which the planet is adding mass is increasing or decreasing. “Our measurements suggest that the planet is in the tail end of its formation process.”

The youthful PDS 70 system is filled with a primordial gas-and-dust disk that provides fuel to feed the growth of planets throughout the entire system. The planet PDS 70b is encircled by its own gas-and-dust disk that’s siphoning material from the vastly larger circumstellar disk. The researchers hypothesize that magnetic field lines extend from its circumplanetary disk down to the exoplanet’s atmosphere and are funneling material onto the planet’s surface.

“If this material follows columns from the disk onto the planet, it would cause local hot spots,” Zhou explained. “These hot spots could be at least 10 times hotter than the temperature of the planet.” These hot patches were found to glow fiercely in UV light.

These observations offer insights into how gas giant planets formed around our Sun 4.6 billion years ago. Jupiter may have bulked up on a surrounding disk of infalling material. Its major moons would have also formed from leftovers in that disk.

A challenge to the team was overcoming the glare of the parent star. PDS 70b orbits at approximately the same distance as Uranus does from the Sun, but its star is more than 3,000 times brighter than the planet at UV wavelengths. As Zhou processed the images, he very carefully removed the star’s glare to leave behind only light emitted by the planet. In doing so, he improved the limit of how close a planet can be to its star in Hubble observations by a factor of five.

“Thirty-one years after launch, we’re still finding new ways to use Hubble,” Bowler added. “Yifan’s observing strategy and post-processing technique will open new windows into studying similar systems, or even the same system, repeatedly with Hubble. With future observations, we could potentially discover when the majority of the gas and dust falls onto their planets and if it does so at a constant rate.”

The researchers’ results were published in April 2021 in The Astronomical Journal.

Featured image: This illustration of the newly forming exoplanet PDS 70b shows how material may be falling onto the giant world as it builds up mass. By employing Hubble’s ultraviolet light (UV) sensitivity, researchers got a unique look at radiation from extremely hot gas falling onto the planet, allowing them to directly measure the planet’s mass growth rate for the first time. The planet PDS 70b is encircled by its own gas-and-dust disk that’s siphoning material from the vastly larger circumstellar disk in this solar system. The researchers hypothesize that magnetic field lines extend from its circumplanetary disk down to the exoplanet’s atmosphere and are funneling material onto the planet’s surface. The illustration shows one possible magnetospheric accretion configuration, but the magnetic field’s detailed geometry requires future work to probe. The remote world has already bulked up to five times the mass of Jupiter over a period of about five million years, but is anticipated to be in the tail end of its formation process. PDS 70b orbits the orange dwarf star PDS 70 approximately 370 light-years from Earth in the constellation Centaurus.Credits: NASA, ESA, STScI, Joseph Olmsted (STScI)