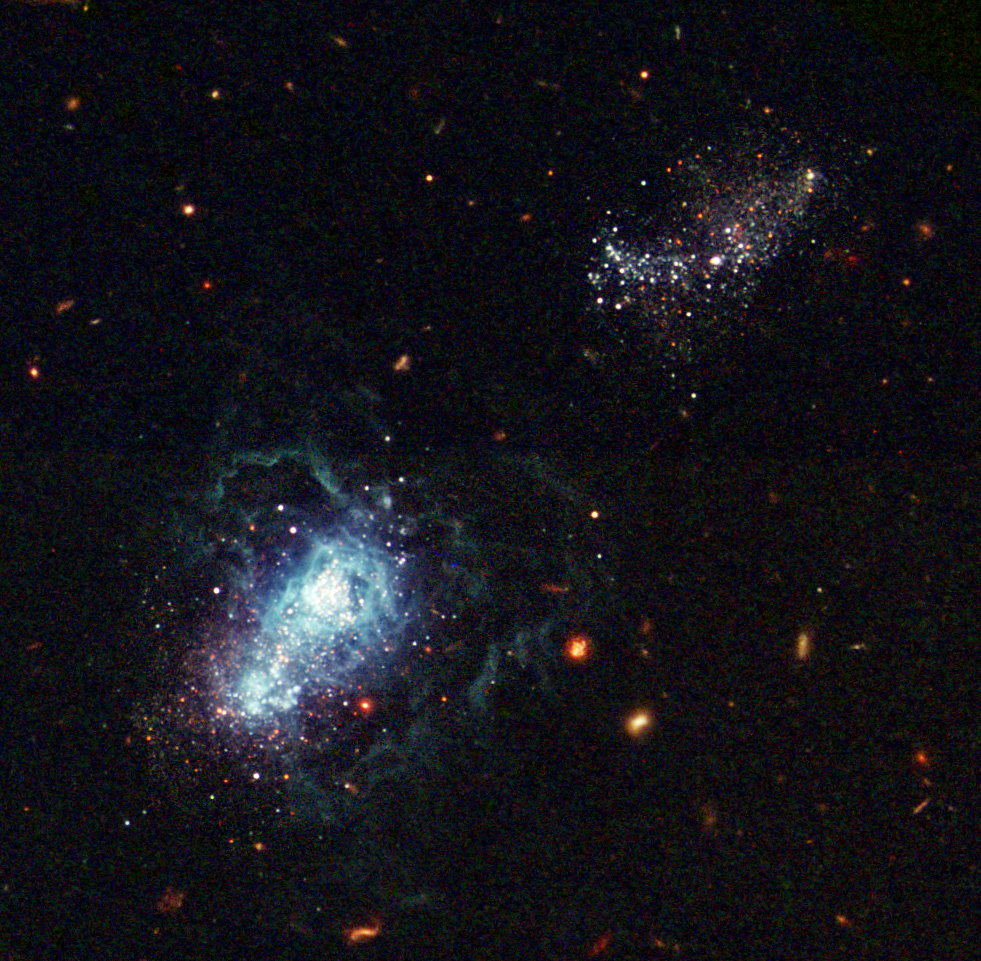 A study looks at the galaxy IZw18, an analogue of the first galaxies that appeared in the universe, for the origin of the radiation that produces a helium halo around it

About thirteen and a half billion years ago, the first galaxies were formed, made up almost entirely of hydrogen and helium, the primordial elements that emerged after the Big Bang. Populated by a type of stars that are now extinct, they are beyond our observation capacity, and “analogue” galaxies are now being used to determine their properties, among them the origin of extensive ionized helium haloes common in primitive galaxies. IZw18, a nearby galaxy used as an analog for decades, now shows that these halos remain, for the time being, inexplicable.

“The dwarf galaxy IZw18 is one of the most metal-poor galaxies (in astrophysics, elements heavier than hydrogen and helium) in the nearby universe, and one of the most similar to the first galaxies. So the study of it allows us to glimpse the conditions that existed in the primordial universe”, highlights Carolina Kehrig, a researcher at the Institute of Astrophysics of Andalusia (IAA-CSIC) who is leading an investigation that analyzes the properties of IZw18.

In 2015, this researcher led the discovery, around the small galaxy IZw18, of a very extensive region of ionized helium, a frequent structure in very distant galaxies with little abundance of metals, and which added another coincidence between IZw18 and primitive galaxies.

Helium ionization requires the presence of objects that emit radiation strong enough to strip electrons from helium atoms. And it was calculated that conventional ionization sources, such as Wolf-Rayet stars -very massive stars with very strong stellar winds- or collisions generated by supernova remnants, did not provide the energy needed to generate IZw18’s ionized helium halo.

The current work studies the effects that X-rays show on the ionization of helium in this dwarf galaxy, dominated by a single source: an X-ray binary, or a system formed by a star similar to the Sun that revolves around a common center of mass with a compact object, be it a neutron star or a black hole.

“High-mass X-ray binaries are a source of high-energy radiation and have been proposed in the literature as a possible mechanism for ionization of helium in galaxies with massive star formation -says Kehrig (IAA-CSIC)-. We investigated for the first time the temporal variability of the IZw18 X-ray binary and found that its low level of X-ray emission, as well as its small variations in the last thirty years, are insufficient to generate the ionized helium halo of the galaxy”.

The extended morphology of the helium halo, as well as the distance between its maximum emission and the position of the X-ray binary, revealed for the first time in this study, reinforce the hypothesis that X-ray photons cannot be responsible for the formation of the ionized helium halo in IZw18.

In previous work, this research group proposed that extremely hot stars, such as low metallicity supermassive stars or massive stars with practically no metals, could hold the key to solving the problem of the excitation of helium in IZw18. These would be very hot stars analogous to first generation stars (known as Population III stars) and which, according to theoretical models, would be composed only of hydrogen and helium and could have hundreds of times the mass of the Sun.

“However, the existence of stars of this type has not yet been observationally confirmed in any galaxy. So, after ruling out conventional sources and X-ray sources, we still do not know what ionizes helium halos in galaxies”, concludes Carolina Kehrig (IAA-CSIC).

Reference: C. Kehrig et al. “On the contribution of the X-Ray source to the extended nebular HeII emission in IZw18”. The Astrophysical Journal Letters, Feb 2021.