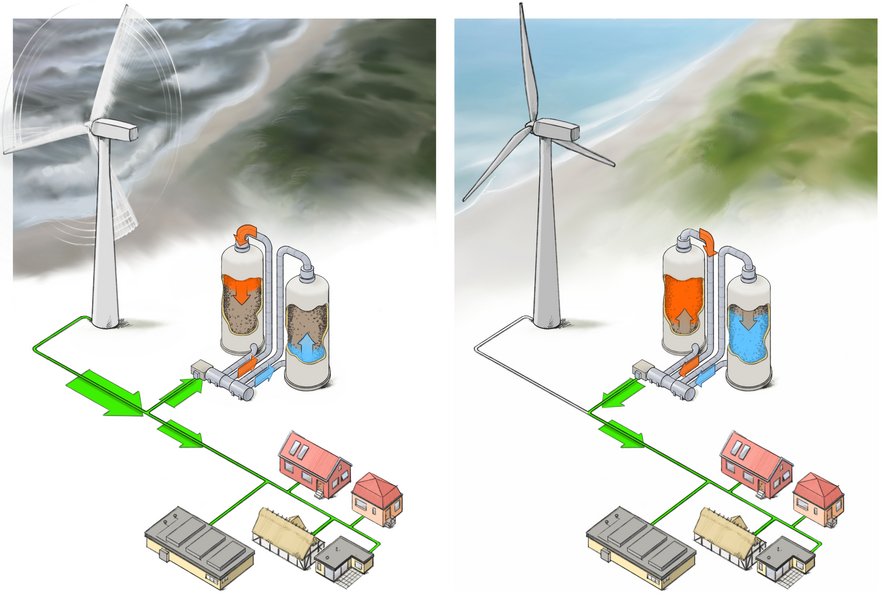 The concept of storing renewable energy in stones has come one step closer to realisation with the construction of the GridScale demonstration plant. The plant will be the largest electricity storage facility in Denmark, with a capacity of 10 MWh. The project is being funded by the Energy Technology Development and Demonstration Program (EUDP) under the Danish Energy Agency.

Pea sized stones heated to 600°C in large, insulated steel tanks are at the heart of a new innovation project aiming to make a breakthrough in the storage of intermittent wind and solar electricity.

The technology, which stores electrical energy as heat in stones, is called GridScale, and could become a cheap and efficient alternative to storing power from solar and wind in lithium-based batteries. While lithium batteries are only cost-effective for the supply of energy for short periods of up to four hours, a GridScale electricity storage system will cost effectively support electricity supply for longer periods – up to about a week.

“The only real challenge with establishing 100 per cent renewable electricity supply is that we can’t save the electricity generated during windy and sunny weather for use at a later time. Demand and production do not follow the same pattern. There are not yet commercial solutions to this problem, but we hope to be able to deliver this with our GridScale energy storage system,” says Henrik Stiesdal, founder of the climate technology company Stiesdal Storage Technologies, which is behind the technology.

In brief, the GridScale technology is about heating and cooling basalt crushed to tiny, pea-sized stones in one or more sets of insulated steel tanks. The storage facility is charged through a system of compressors and turbines, which pumps heat energy from one or more storage tanks filled with cool stones to a similar number of storage tanks filled with hot stones, when there is surplus power from wind or the sun.

This means the stones in the cold tanks become very cold, while they become very hot in the hot tanks; in fact up to 600oC. The heat can be stored in the stones for many days, and the number of sets of stone-filled tanks can be varied, depending on the length of storage time required.

When there is demand for electricity again, the process reverses, so the stones in the hot tanks become colder while they become warmer in the cold tanks. The system is based on an inexpensive storage material and mature, well-known technology for charging and discharging.

“Basalt is a cheap and sustainable material that can store large amounts of energy in small spaces, and that can withstand countless charges and discharges of the storage facility. We are now developing a prototype for the storage technology to demonstrate the way forward in solving the problem of storing renewable energy – one of the biggest challenges to the development of sustainable energy worldwide,” says Ole Alm, head of development at the energy group Andel, which is also part of the project.

The GridScale prototype will be the largest storage facility in the Danish electricity system, and a major challenge will be to make the storage flexibility available on the electricity markets in a way that provides the best possible value. Consequently, this will also be part of the project.

The precise location of the prototype storage facility has yet to be decided. However, it will definitely be in the eastern part of Denmark in south or west Zealand or on Lolland-Falster, where production from new large PV units in particular is growing faster than consumption can keep up.

The full name of the innovation project is ‘GridScale – cost-effective large-scale electricity storage’, and it will run for three years with a total budget of DKK 35 million (EUR 4.7 million).  The project is being funded with DKK 21 million (EUR 2.8 million) from the Energy Technology Development and Demonstration Program (EUDP).

The partners will provide an energy system analysis and design optimisation for a stone storage facility as well as optimize the technical concepts and mature the GridScale technology to a ready-to-market scalable solution.

For example, the European energy system model developed by AU will be combined with the model for optimising turbines developed by DTU to gain insight into the potential role of the stone storage facility in a European context and to optimise the design:

“The transition to renewable energy changes the way the energy system works – simply because wind and solar energy are not necessarily produced when we need it. Therefore, we need to find out how the technical design can best be adapted to the energy system and in which countries and when in the green transition the technology has the greatest value. We will look to identify the combination of energy technologies that will provide the greatest value for the storage solution. I think that stone storage technology has a huge potential in many places around the world and could be of great advantage in the green transition,” says Associate Professor Gorm Bruun Andresen from the Department of Mechanical and Production Engineering at Aarhus University.

Featured image: When there is a surplus of electricity from wind or solar, the energy storage is charged. This is done by a system of compressors and turbines pumping heat energy from one or more storage tanks filled with cool stones to a corresponding number of storage tanks filled with hot stones. This makes the stones in the cold tanks very cold, while it gets very hot in the hot tanks, up to 600 degrees. Illustration: Claus Rye, Stiesdal Storage Technologies.

This science news is confirmed by us from Aarhus University