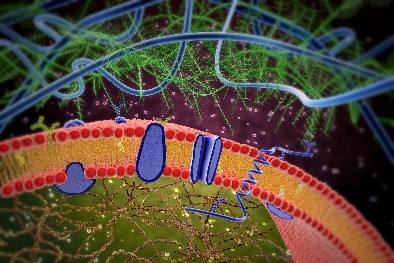 Isobel Scarisbrick, Ph.D., directs the Neural Repair Laboratory within Mayo Clinic’s Department of Physical Medicine and Rehabilitation. Her lab examines central nervous system repair after injury, such as traumatic spinal cord injury or a disease like multiple sclerosis (MS). A major area of innovation for the lab is improving nerve regeneration by identifying what helps or hinders that process.

Since the late 1990s, Dr. Scarisbrick has traced the body’s mechanisms for repair. In 2013, she and a team of authors reported that kallikrein 6, an enzyme linked to neurodegeneration, in concert with the enzyme thrombin, linked to blood clotting. These enzymes were elevated in mouse models of spinal cord injury and shown to contribute to neurodegeneration. They acted via two receptors called PAR1 and PAR2.

The team extended its finding in models of MS and a type of brain cancer. Over the past six years or so, the team clarified further effects of these enzymes and receptors. The scientists have examined not only neural cells, but also the enzyme and receptor effects on the immune system and cellular microenvironments.

Last year, they pivoted to look at diet, publishing two papers on how a high-fat diet affects the central nervous system. This year, they’ve narrowed the focus to cholesterol and its contribution to repair of tissues after spinal cord injury. Dr. Scarisbrick explains below.

“Aside from injury, systemic metabolic dysfunction itself also impairs the innate capacity for repair and regeneration in general. We haven’t published all the data yet, and this work by the way was funded by the Center for Biomedical Discovery, but I call the oligodendrocytes — those little glial cells that produce the myelin sheath to insulate neurons — I call them the canary in the coal mine. They are very sensitive to diet.

We are looking at the high-fat/high-sucrose diet, a high-fat diet, and now a low- carb/high-fat diet. Basically, it’s looking like anything extreme is not good for the oligodendrocytes and the myelin sheath.

That work is linked to our most recent work because myelin is one of the most cholesterol-rich membranes in the body. Cholesterol production is essential for survival, physiology and function of every cell. It controls so many aspects of cell membrane growth, it can act like a signaling molecule, and has a variety of other functions.

But in terms of neural repair, cholesterol contributes significantly to the ability of an axon to make more membranes and then to form synapses, so clearly it’s vital after spinal cord injury, and other injuries and diseases of the central nervous system, as well as aging.

The thrombin receptor, PAR1, is a critical biological node. It regulates several cascades that are important for neural repair, including cholesterol generation and the ability of growth factors to signal. Knocking it out has a pretty big impact, as there aren’t too many things where you can knock out one gene and have such an improvement in recovery.

In 2016, we published a paper that showed knocking out PAR1 in a mouse model of spinal cord injury improves function and we linked it to inflammation. That is, you reduce inflammation if you knock out this receptor. But we didn’t have a mechanism. One reason why we saw an impact may be because PAR1 is not only affecting the neuron, but it’s also a receptor on immune cells. Over activating immune cells causes them to be proinflammatory, which is not good for spinal cord injury recovery. And further, we showed that it skews the immune cell into causing more harm than helping. We described it as a switch.

So you switch it on, and it causes inflammation, it blocks neurite outgrowth ― neurites are the parts that project out from a neuron ― and it blocks myelination. You switch it off, and you unleash the innate capacity for repair of both neurons and myelinating cells.

You’re going to dampen immune response, but it goes beyond just an immune modulator. It goes further into regulating fundamental processes that are important for neural repair. We have a lot of immune modulators. Even aspirin is a pretty good anti-inflammatory, but it doesn’t do anything for spinal cord injury.

We continued to study this receptor because we knew it was more than just blocking inflammation. And over time, we started to uncover this additional biology that underlies the receptor that appears to be part of the mechanism for repair. Certainly, there’s a lot more to the story, a lot more to discover and so we’re excited to continue.

The study to do ― and we’ve proposed this as a next step ― is to examine the effect of statin, which is a cholesterol inhibitor, at acute time points or at chronic time points in a mouse model. There are other nuanced ways to investigate this question, but this would be the first step. Now a mouse is not a man and mouse spinal cord injury is only a model of what happens in humans. They are not the same. But we can start to get ideas about the important factors. We can turn genes on and off and administer drugs to test out some of these ideas prior to clinical trials.”