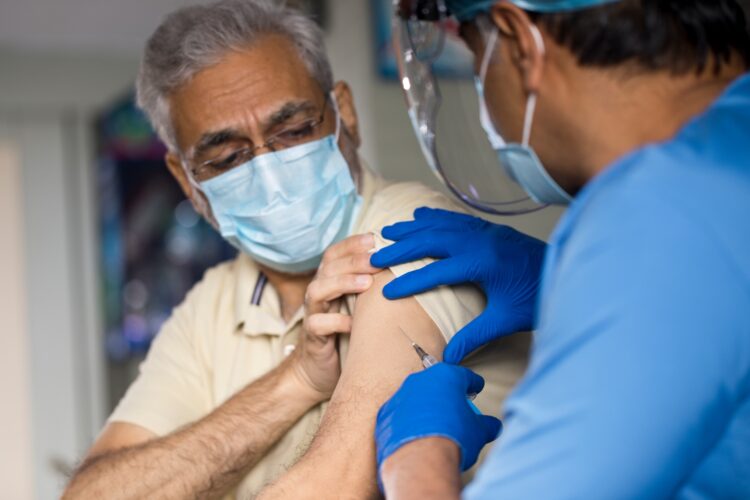 The second dose of the Pfizer COVID-19 vaccine produced a 3.5-times greater antibody response when given at 12 weeks, compared to three weeks, in people over 80.

To provide real-time information in the pandemic, these preliminary results will be posted on the medRxiv preprint server and submitted to a journal to undergo peer review.

The study was led by the University of Birmingham in collaboration with Public Health England (PHE) and involved 175 people who were aged over 80 and living independently.

It is the first direct comparison of the immune response in any age group between those given the second Pfizer vaccine at a three-week interval and those at a 12-week interval.

The Pfizer vaccine was originally authorised for a three-week interval between doses. However several countries, including the UK, chose to expand this to a 12-week interval to allow a higher percentage of the population to receive one vaccine dose quicker.

The research found that extending the second dose interval to 12 weeks increased the peak SARS-CoV-2 spike specific antibody response 3.5-fold. This is compared to those who had the second vaccine at three weeks.

Although the peak cellular immune responses were lower after the delayed second vaccine, responses were comparable between the groups when measured at a similar time point following the first dose.

The team concluded that extending administration of the second Pfizer vaccine to 12 weeks potentially enhances and extends antibody immunity. This is believed to be important in virus neutralisation and prevention of infection.

SARS-CoV-2 vaccines have been remarkably effective in providing large-scale protection against infection and symptomatic disease – but many questions remain regarding their optimal delivery for provision of effective and sustained immunity.

This is the first time antibody and cellular responses have been studied when the second vaccine is given after an extended interval. Our study demonstrates that peak antibody responses after the second Pfizer vaccine are markedly enhanced in older people when this is delayed to 12 weeks.

This research is crucial, particularly in older people, as immune responses to vaccination deteriorate with age. Understanding how to optimise COVID-19 vaccine schedules and maximise immune responses within this age group is vitally important.

Corresponding author Professor Paul Moss, at the University of Birmingham and principal investigator of the UK Coronavirus Immunology Consortium, added:

The enhanced antibody responses seen after an extended interval may help to sustain immunity against COVID-19 over the longer term and further improve the clinical efficacy of this powerful vaccine platform.

Our research findings may be important in the development of global vaccination strategy as extension of interval of the second vaccine dose in older people may potentially reduce the need for subsequent booster vaccines.

The team found that within the three-week interval group, 60% had a confirmed cellular response at two to three weeks following the second vaccine. Although this fell to only 15% eight to nine weeks later.

The proportion of participants showing a cellular response in the 12-week interval group was only 8% at five to six weeks after the first vaccine. This rose to 31% two to three weeks after the second vaccine.  Research is required to further explore these variations in responses.

The higher antibody responses in people receiving two doses of the Pfizer vaccine using an extended 12-week interval provides further supportive evidence of the benefits of the UK approach to prioritise the first dose of vaccine. This analysis shows better antibody responses in those receiving their second dose at 12 weeks compared to the standard three-week schedule.

It is vital that you take up the offer of vaccination as it is the best way to protect yourself and your community and to help us out of the pandemic.

Taking a collaborative approach to research through the UK Coronavirus Immunology Consortium and National Core Studies has allowed us to drive forward our knowledge at an incredible pace and build our understanding of how different components of the immune system respond to COVID vaccines. This knowledge will allow us to optimise vaccination protocols and maximise protection against SARS-CoV-2 within our population.