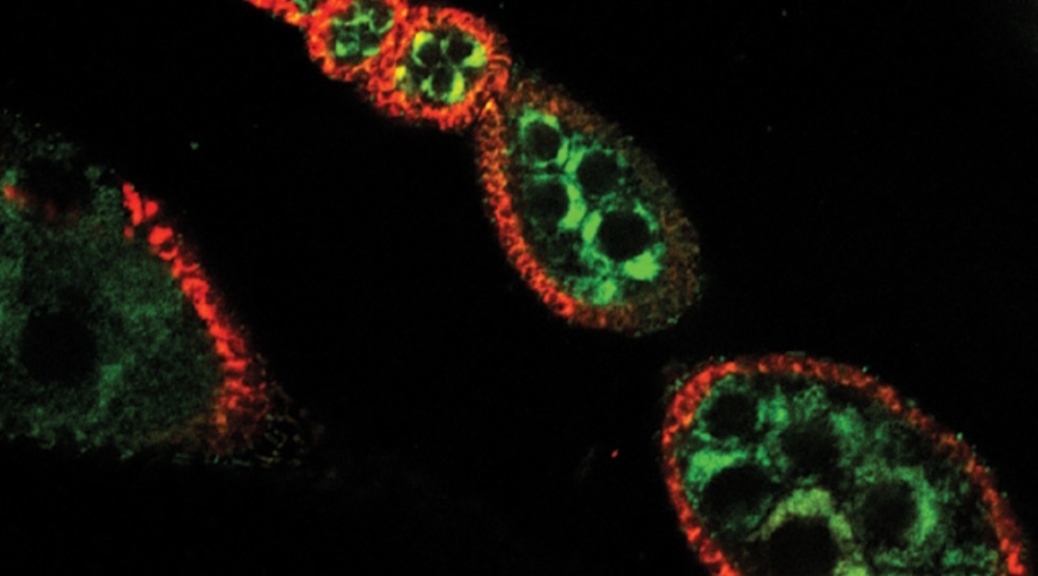 The last decade has witnessed a revolution in the study of the symbiotic relations between gut bacteria and their animal hosts, including humans, wherein these microbes were found to affect both health and disease. Yet, despite the immense progress that has been made, the mechanisms by which bowel-dwelling microbes engage with our bodily functions are not well understood. A recently published study conducted by scientists at the Weizmann Institute of Science has exposed a fundamental regulatory mechanism based on a tight relationship between gut bacteria and host energy production in a fruit fly model. These findings offer a unifying explanation for the diverse mechanistic impacts of gut bacteria and also account for the well-known trade-off between survival and reproduction.

Previous work by the group of Prof. Yoav Soen of the Biomolecular Sciences Department revealed a surprising connection between gut bacteria and oogenesis – the production or development of ova (egg cells) – in the ovaries. In the current study – led by Dr. Yulia Gnainsky in collaboration with Dr. Sergey Malitsky and Dr. Maxim Itkin from the Life Sciences Core Facilities Department – the researchers sought to understand exactly how gut bacteria wield their remote influence over the reproductive system. Recruiting the fruit fly to their cause, they found that this influence is mediated by bacterial-derived factors that regulate both the production of energy in the host body and the energy expenditure on various host functions. This includes regulation of the development and function of the reproductive system by circulating bacterial metabolites that are required for cellular respiration in the mitochondria.

Prof. Yoav Soen: “We uncovered a fundamental mechanism of bacterial regulation over mitochondrial activity throughout the host body”

The mitochondrion, popularly referred to as the cell’s “powerhouse,” is the eukaryotic organelle mediating the process of cellular respiration. Often found in hundreds or even thousands of copies in most of the body’s cells, mitochondria are our main source for the production of ATP – the primary energy currency of all organisms. ATP production in the mitochondria relies on key coenzymes, such as FAD. Coenzymes are commonly synthesized from vitamins that serve as precursor molecules. The precursor for the biosynthesis of FAD, for example, is vitamin B2 (riboflavin). However, much like humans and other animals, the fly cannot produce B-type vitamins on its own, so the provision of vitamins such as riboflavin has to be “outsourced” – to the diet or the gut microbiota (or both). B vitamins and other metabolic products of gut bacteria are absorbed in the intestine and subsequently distributed to numerous destinations throughout the body.

While the significance of bacterial vitamins is expected to increase when the host is malnourished, the researchers hypothesized that the bacterial supply of B vitamins can regulate the mitochondrial function in host cells under a range of standard nutritional conditions as well. To test their hypothesis, they removed all gut bacteria from female fruit flies – leaving them germ free – and noted a shortage of FAD, which led to reduced mitochondrial activity, lower ATP production and mild weight loss. Substantial attenuation of mitochondrial activity was observed in the ovaries, particularly in follicle cells of the developing egg chamber. To determine if the repressed oogenesis is caused by the attenuation of ovarian mitochondrial activity, the researchers inhibited the expression of certain mitochondrial genes in ovarian follicle cells, this time without eliminating the gut microbiota. They found that disrupting the mitochondrial function of these cells is enough to significantly impair oogenesis; in fact, this effect was similar to the one that was observed in germ-free flies. Moreover, recolonization of germ-free female flies with gut bacteria (or alternatively, supplementing their diets with riboflavin), restored the mitochondrial function in the follicle cells, elevated the ATP levels in the ovaries and the entire body and increased ova production. The causal relation between gut bacterial metabolism and host energy production was further supported by measurements of ATP levels and overall weight of male flies.

“In our effort to elucidate the ‘remote’ influence of gut bacteria over the reproductive system, we uncovered a fundamental mechanism of bacterial regulation over mitochondrial activity throughout the host body,” Prof. Soen explains. “As previously observed time and again, the relative simplicity of the fruit fly model makes it particularly effective for discovering elementary processes that characterize all living beings, including humans. Since the basic mechanisms of energy production are highly evolutionarily conserved, we expect that this bacterial-mitochondrial axis of regulation will be found to apply to many other species as well.”

The findings of this study also offer a mechanistic explanation for the known trade-off between survival and reproduction. Various conditions of stress (including malnutrition) require reduced investment in the highly energy-consuming process of reproduction, so as to enable the body to cope with the stressor(s). The causal link between a shortage of type-B vitamins (and their derived coenzymes) and the predominant repression of mitochondrial activity in the ovary prioritizes the expenditure of energy on processes that ensure personal survival over reproduction. “Although we have only demonstrated this mechanistic reallocation of energy in germ-free flies, we expect it to apply in a broad range of scenarios,” says Dr. Gnainsky.

Taken together, these findings uncover an important bacterial-mitochondrial axis of influence, linking gut bacteria with systemic regulation of host energy and reproduction. The fact that the mitochondrion is a genetically distinct organelle that is thought to be derived from ancient bacteria forms an intriguing image of cooperation between gut bacteria and their “primordial mothers” – the mitochondria.

The mitochondrion is a descendent of bacteria that merged through endosymbiosis with other unicellular microorganisms nearly 1.5 billion years ago.

Provided by Weizmann Institute of Science