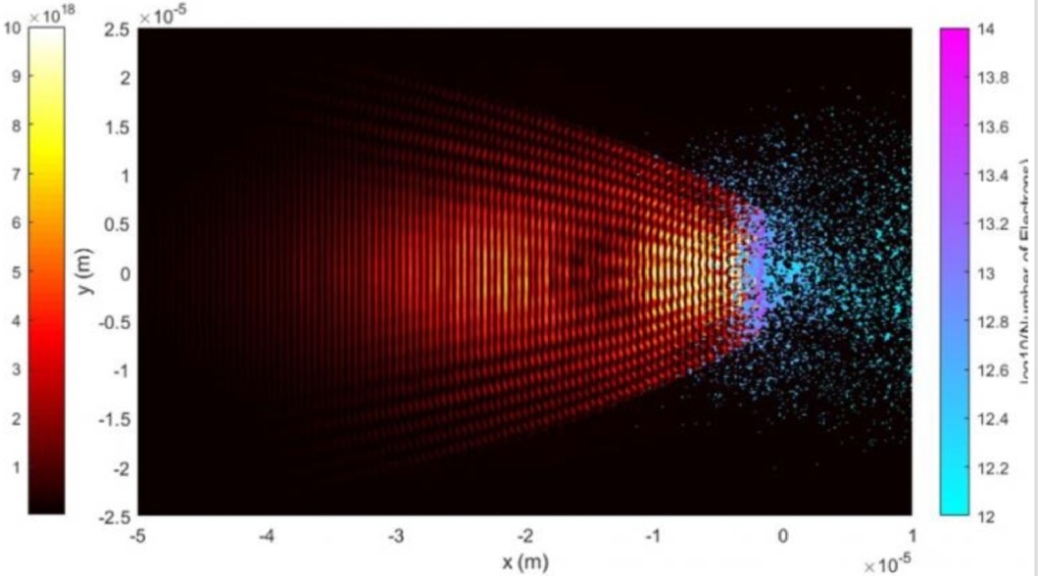 Intense short-pulse laser-driven production of bright high-energy sources, such as X-rays, neutrons and protons, has been shown to be an invaluable tool in the study of high energy density science.

In an effort to address some of the most challenging applications, such as X-ray radiography of high areal density objects for industrial and national security applications, both the yield and energy of the sources must be increased beyond what has currently been achieved by state-of-the-art high-intensity laser systems.

A team of scientists from Lawrence Livermore National Laboratory (LLNL), University of Austin and General Atomics took on this challenge. Specifically, the team conducted experimental measurements of hot electron production using a short-pulse, high-contrast laser on cone and planar targets.

The cone geometry is a Compound Parabolic Concentrator (CPC) designed to focus the laser to the tip. The cone geometry shows higher hot electron temperatures than planar foils. Simulations identified that the primary source of this temperature enhancement is the intensity increase caused by the CPC.

“We were able enhance the temperature of the electron beam from our high-intensity laser interactions by shooting into a focusing cone target,” Rusby said. “It shows that we understand how the compound parabolic concentrator works under these laser conditions.”

Rusby said increasing the coupling into high-energy electrons in these interactions is crucial for developing applications from laser-plasma interactions.

“It is very encouraging to see significant enhancements are possible using the CPC target platform on a petawatt 100 fs class laser system, which is already capable of near diffraction limited operation,” said Andrew MacPhee, co-author of the paper. “Non-imaging optics applied to laser target interactions are redefining the parameter space accessible to the community.”

The team used the Texas petawatt laser system at the University of Austin during a six-week period, which has a short pulse and high contrast that allowed the experiment to work. The target is a compound CPC that is specifically designed to focus more laser energy toward the tip and increase the intensity.

“The increase in electron temperature strongly agreed with the increase we would expect when using the CPC,” Rusby said.

The Department of Energy’s Office of Science supported the LaserNetUS initiative at Texas Petawatt and LLNL’s Laboratory Directed Research and Development program funded the team and the crucially important target development from General Atomics.

The team has been awarded additional time through LaserNetUS at the Texas petawatt to continue research on CPCs targets. This time, the team will concentrate on the acceleration of the protons from the rear surface and the enhancement that the CPCs provide.

Andrew Mackinnon, a co-author of the paper and a principal investigator for a Strategic Initiative Laboratory Directed Research & Development, is using these CPC targets for the project.

“These experiments showed that miniature plasma mirror targets do improve coupling of petawatt-class lasers to MeV (mega-electronvolt) electrons, which benefits potential applications such as laser-based MeV radiography,” he said.

Featured image: This image shows the intensification of the laser in simulations and the electrons being accelerated. © LLNL