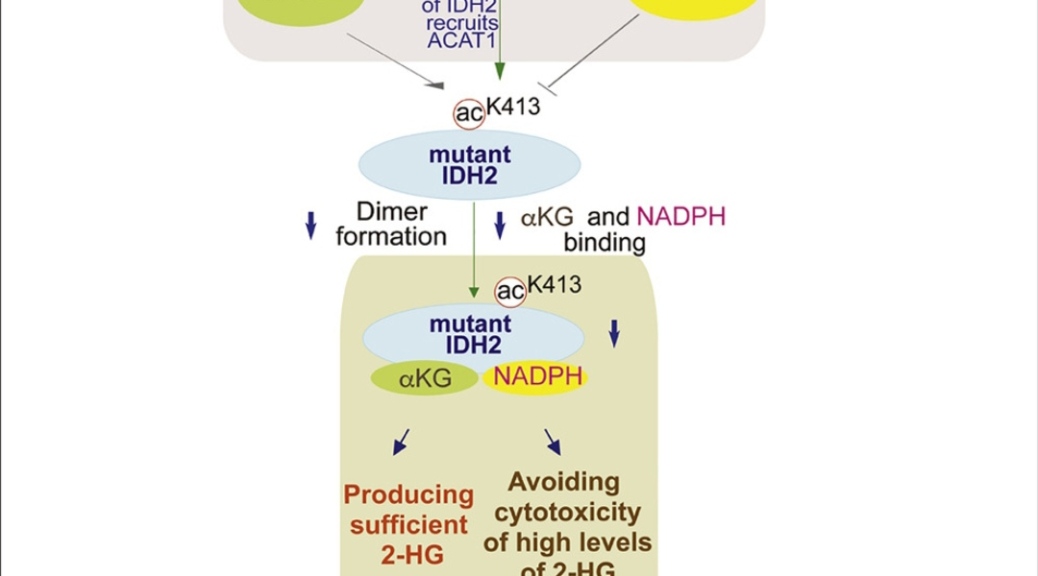 Researchers revealed new insights into how acute myeloid leukemia (AML) develops and progresses, according to a study published in Molecular Cell on July 20, 2021. They describe a mechanism by which AML cells regulate a cancer-related protein, mutant IDH2, to increase the buildup of blood cancer cells–a distinguishing characteristic of the disease. This improved understanding of IDH2-related mechanism in AML will allow physicians to better understand how current IDH2-targeting medications work to ultimately improve treatments for AML patients.

AML is a cancer of the blood cells that can occur when immature white blood cells, cells that normally fight infection, acquire certain genetic mutations that cause them to multiply rapidly and build up the bone marrow and blood. It is the most common acute leukemia in adults and usually gets worse quickly if it is not treated.

This cancer can be driven by genetic mutations leading to the production of cancer-related mutant proteins, such as mutant IDH2 and IDH1. Normal IDH proteins are important in cell metabolism and play a role in the production of energy from the breakdown of molecules from food. The mutant forms of IDH proteins, found in AML cells, take on an extra function of making a cancer-causing molecule called 2-HG. 2-HG blocks the maturation of white blood cells, driving the development of leukemia.

Although 2-HG can drive the develop of cancer, at high concentrations it becomes toxic, killing cancer cells. Researchers at the University of Chicago Medicine Comprehensive Cancer Center with collaborators, were interested in learning how mutant IDH2 drives the development of AML, and how the leukemia cells are able to regulate the production of 2-HG to promote spread and avoid cell death.

The research team, led by Jing Chen, PhD, professor of medicine, discovered that AML cells are able to modify mutant IDH2 and regulate its activity, thus controlling the amount of 2-HG that it can produce. They determined the threshold of 2-HG concentration that allows it to switch from a cancer-causing to a cancer-killing agent.

Using human AML cells, they found that mutant IDH2 was controlled by a master regulator, called FLT3, that can activate and deactivate proteins through a process of modification. The team defined the FLT3-initiated series of events leading to a chemical modification, called acetylation, of mutant IDH2, and found that this type of modification blocks its activity and decreases the amount of 2-HG in the cell, allowing AML to avoid cell death.

“Our studies demonstrate that different intracellular concentrations of 2-HG correlate with critical cellular functions that can mean life or death for cancer cells,” said Chen. “We also elucidated the distinct regulatory mechanisms for the protein variants, mutant IDH1 and mutant IDH2, in AML. This thorough understanding of AML driven by IDH mutant proteins allows us to better understand the mechanisms of action of AML-targeted therapies.”

Treatments for AML include chemotherapy, radiation and medications that specifically target the protein drivers of AML. In fact, inhibitors that target mutant IDH2 and IDH1 have been approved by the FDA to treat AML that has relapsed or been resistant to other medications. For example, enasidenib is a small molecule that binds to and inhibits the IDH2 mutant. It has been shown to increase maturation of leukemia cells and reduce the number of leukemic cells in animal models. This latest discovery describing how AML cells regulate mutant IDH proteins and the production of 2-HG provides new insights into how mutant IDH-targeting medications work against AML. Studies such as these may allow for the development of better treatment options for patients with AML.

Provided by University of Chicago