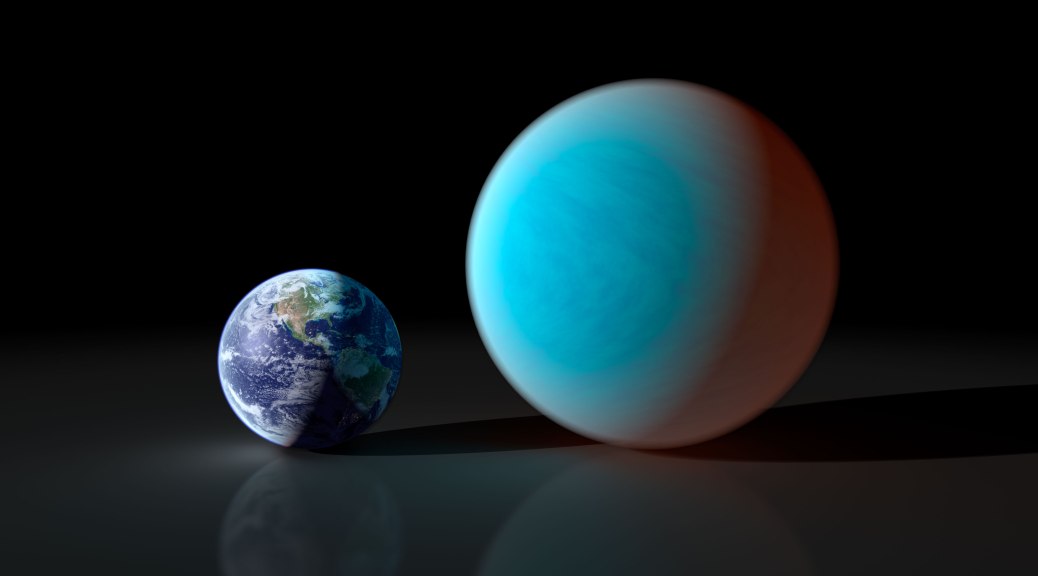 A new study shows how the chemicals in an exoplanet’s atmosphere can, in some cases, reveal whether or not the temperature on its surface is too hot for liquid water.

In our solar system, planets are either small and rocky (like Earth) or large and gaseous (like Neptune). But around other stars, astronomers have found planets that fall in between – worlds slightly larger than Earth but smaller than Neptune. These planets may have rocky surfaces or liquid-water oceans, but most are likely to be topped with atmospheres that are many times thicker than Earth’s and opaque.

In the new study, accepted in the Astrophysical Journal Letters, researchers show how the chemistry of those atmospheres could reveal clues about what lies beneath – specifically, which planets are too hot to support liquid-water oceans. Since liquid water is a necessary ingredient for life as we know it, this technique could help scientists narrow their search for potentially habitable exoplanets, or planets beyond our solar system. More than 4,500 exoplanets have been confirmed in our galaxy, with over 7,700 candidates yet to be confirmed, but scientists estimate that hundreds of billions of exoplanets exist in our galaxy.

Some NASA space telescopes equipped with spectrometers can reveal the chemical makeup of an exoplanet’s atmosphere. A chemical profile of Earth wouldn’t be able to reveal pictures of, say, cows or humans on the planet’s surface, but it would show carbon dioxide and methane produced by mammals, and oxygen produced by trees. None of these chemicals alone would be a sign of life, but in combination they would point to the possibility that our planet is inhabited.

The new paper shows which chemicals might point to hidden oceans on exoplanets between 1.7 and 3.5 times the diameter of Earth. Since Neptune is about four times Earth’s diameter, these planets are sometimes called “sub-Neptunes.”

Video: To help understand the incredible variety of exoplanets that exist in our galaxy, scientists sometimes use terms like “hot Jupiter” and “sub-Neptune” to indicate the similarities and differences between exoplanets (planets beyond our solar system) and planets within in our solar system. Credit: NASA/JPL-Caltech

A thick atmosphere on a sub-Neptune planet would trap heat on the surface and raise the temperature. If the atmosphere reaches a certain threshold – typically about 1,430 degrees Fahrenheit (770 degrees Celsius) – it will undergo a process called thermochemical equilibrium that changes its chemical profile. After thermochemical equilibrium occurs – and assuming the planet’s atmosphere is composed mostly of hydrogen, which is typical for gaseous exoplanets – carbon and nitrogen will predominantly be in the form of methane and ammonia.

Those chemicals would largely be missing in a cooler, thinner atmosphere where thermochemical equilibrium has not occurred. In that case, the dominant forms of carbon and nitrogen would be carbon dioxide and molecules of two nitrogen atoms.

A liquid-water ocean underneath the atmosphere would leave additional signs, according to the study, including the absence of nearly all stray ammonia, which would be dissolved in the ocean. Ammonia gas is highly soluble in water, depending on the pH of the ocean (its level of acidity). Over a wide range of plausible ocean pH levels the researchers found the atmosphere should be virtually free of ammonia when there is a massive ocean underneath.

“If we see the signatures of thermochemical equilibrium, we would conclude that the planet is too hot to be habitable,” said Renyu Hu, a researcher at NASA’s Jet Propulsion Laboratory, who led the study. “Vice versa, if we do not see the signature of thermochemical equilibrium and also see signatures of gas dissolved in a liquid-water ocean, we would take those as a strong indication of habitability.”

NASA’s James Webb Space Telescope, set to launch Dec. 18, will carry a spectrometer capable of studying exoplanet atmospheres. Scientists like Hu are working to anticipate what kinds of chemical profiles Webb will see in those atmospheres and what they could reveal about these distant worlds. The observatory has the capabilities to identify signs of thermochemical equilibrium in sub-Neptune atmospheres – in other words, signs of a hidden ocean – as identified in the paper.

As Webb discovers new planets or does more in-depth studies of known planets, this information could help scientists decide which of them are worthy of additional observations, especially if scientists want to target planets that might harbor life.

“We don’t have direct observational evidence to tell us what the common physical characteristics for sub-Neptunes are,” said Hu. “Many of them may have massive hydrogen atmospheres, but quite a few could still be ‘ocean planets.’ I hope this paper will motivate many more observations in the near future to find out.”

JPL is managed for NASA by Caltech in Pasadena, California.

Featured image: Planets that are between 1.7 and 3.5 times the diameter of Earth are sometimes called “sub-Neptunes.” There are no planets in this size range in Earth’s solar system, but scientists think many sub-Neptunes have thick atmospheres, potentially cloaking rocky surfaces or liquid oceans. Credit: NASA/JPL-Caltech