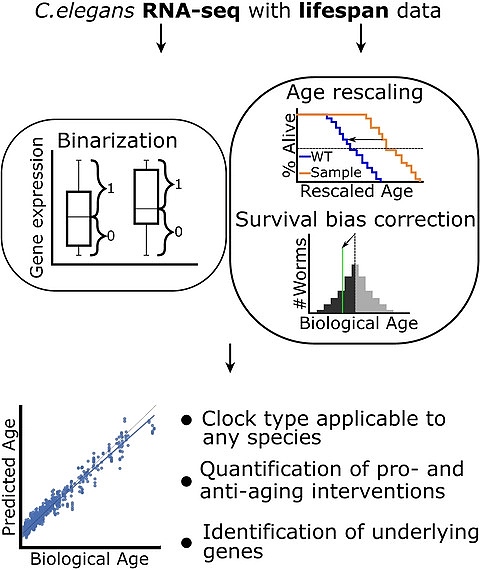 Using the model organism Caenorhabditis elegans, researchers at the University of Cologne have developed an ‘aging clock’ that reads the biological age of an organism directly from its gene expression, the transcriptome. Bioinformatician David Meyer and geneticist Professor Dr Björn Schumacher, director of the Institute for Genome Stability in Aging and Disease at the CECAD Cluster of Excellence in Aging Research and the Center for Molecular Medicine Cologne (CMMC), describe their so-called BiT age (binarized transcriptomic aging clock) in the article ‘BiT age: A transcriptome based aging clock near the theoretical limit of accuracy’ in Aging Cell.

We are all familiar with chronological age – our age since birth. But biological age can differ from it, at times significantly. Everyone ages differently. Scientists can use aging clocks to determine an organism’s biological age. Until now, aging clocks such as Horvath’s epigenetic clock have been based on the pattern of methylations, small chemical groups that attach to DNA and change with age. Using the transcriptome, the new clock takes into consideration the set of genes that are read from DNA (messenger RNA) to make proteins for the cell.

Until now, the transcriptome was considered too complex to indicate age. Sometimes genes transcribe a particularly large amount of mRNA, sometimes less. Hence, so far it has not been possible to develop precise aging clocks based on gene activity. Meyer and Schumacher’s new approach uses a mathematical trick to eliminate the differences in gene activity. The binarized transcriptome aging clock divides genes into two groups – ‘on’ or ‘off’ – thus minimizing high variation. This makes aging predictable from the transcriptome. ‘Surprisingly, this simple procedure allows very accurate prediction of biological age, close to the theoretical limit of accuracy. Most importantly, this aging clock also works at high ages, which were previously difficult to measure because the variation in gene activity is particularly high then,’ said Meyer.

BiT age is based exclusively on approximately 1,000 different transcriptomes of C. elegans, for which the lifespan is precisely known. Model organisms such as the nematode provide a controllable view of the aging process, allowing biomarkers to be discovered and the effects of external influences such as UV radiation or nutrition on longevity to be studied.

The new aging clock allows researchers to accurately predict the pro- and anti-aging effects of gene variants and various external factors in the nematode at a young age. The aging clock also showed that genes of the immune response as well as signalling in neurons are significant for the aging process. ‘BiT age can also be applied to predict human age quickly and with very high accuracy. Measuring biological age is important to determine the influence of environment, diet or therapies on the aging process and the development of age-related diseases. This clock could therefore find wide application in aging research. Since BiT age is based purely on gene activity, it can basically be applied to any organism,’ Schumacher explained.

Provided by University of Cologne

A phenomenon of quantum mechanics known as superposition can impact timekeeping in high-precision clocks, according to a theoretical study from Dartmouth College, Saint Anselm College and Santa Clara University.

Research describing the effect shows that superposition—the ability of an atom to exist in more than one state at the same time—leads to a correction in atomic clocks known as “quantum time dilation.”

The research, published in the journal Nature Communications, takes into account quantum effects beyond Albert Einstein’s theory of relativity to make a new prediction about the nature of time.

“Whenever we have developed better clocks, we’ve learned something new about the world,” said Alexander Smith, an assistant professor of physics at Saint Anselm College and adjunct assistant professor at Dartmouth College, who led the research as a junior fellow in Dartmouth’s Society of Fellows. “Quantum time dilation is a consequence of both quantum mechanics and Einstein’s relativity, and thus offers a new possibility to test fundamental physics at their intersection.”

In the early 1900s, Albert Einstein presented a revolutionary picture of space and time by showing that the time experienced by a clock depends on how fast it is moving—as the speed of a clock increases, the rate at which it ticks decreases. This was a radical departure from Sir Isaac Newton’s absolute notion of time.

Quantum mechanics, the theory of motion governing the atomic realm, allows for a clock to move as if it were simultaneously traveling at two different speeds: a quantum “superposition” of speeds. The research paper takes this possibility into account and provides a probabilistic theory of timekeeping, which led to the prediction of quantum time dilation.

To develop the new theory, the team combined modern techniques from quantum information science with a theory developed in the 1980s that explains how time might emerge out of a quantum theory of gravity.

“Physicists have sought to accommodate the dynamical nature of time in quantum theory for decades,” said Mehdi Ahmadi, a lecturer at Santa Clara University who co-authored the study. “In our work, we predict corrections to relativistic time dilation which stem from the fact that the clocks used to measure this effect are quantum mechanical in nature.”

In the same way that carbon dating relies on decaying atoms to determine the age of organic objects, the lifetime of an excited atom acts as a clock. If such an atom moves in a superposition of different speeds, then its lifetime will either increase or decrease depending on the nature of the superposition relative to an atom moving at a definite speed.

The correction to the atom’s lifetime is so small that it would be impossible to measure in terms that make sense at the human scale. But the ability to account for this effect could enable a test of quantum time dilation using the most advanced atomic clocks.

Just as the utility of quantum mechanics for medical imaging, computing, and microscopy, might have been difficult to predict when that theory was being developed in the early 1900s, it is too early to imagine the full practical implications of quantum time dilation.

UCLA researchers have pinpointed a second hand to the brain’s internal clock. By revealing how and where the brain counts and represents seconds, the UCLA discovery will expand scientists’ understanding of normal and abnormal brain function.

Tracking the passage of time to the second is critical for motor control, learning and cognition, including the ability to anticipate future events. While the brain depends on its circadian clock to measure hours and days, the circadian clock does not have a second hand.

Instead the brain measures seconds through changing patterns of cellular activity. Much like a line of falling dominoes, each neuron activates the next, and time is marked by the neuron that is currently active. By analogy, if a sequence of falling dominoes takes 10 seconds from start to finish, one can deduce that 5 seconds has elapsed when the middle domino falls.

Recordings in the striatum and premotor cortex of the brain revealed that changing patterns of neural activity in both regions encoded time—consistent with the notion that the brain has multiple clocks. But the pattern in the striatum was closer to the sequence of falling dominoes—a pattern referred to as a neural sequence—compared to the patterns in a motor area that provides input to the striatum.

Timing is a fundamental part of human behavior, learning and thought. By revealing how and where the brain counts and represents seconds, the UCLA discovery will deepen scientists’ understanding of normal and abnormal brain function.