There’s one solution to this paradox that theorists keep coming back to, although it has some problems of its own. It’s called the Novikov self-consistency principle, and it basically states that any events that occur while traveling to the past are consistent with and identical to the events that occurred the “first time around.” In other words, there’s only one past, and if you end up traveling back there, then you were already there to begin with.

Confused? Actually, you’ve probably seen this the self-consistency principle play out already. In “Harry Potter and the Prisoner of Azkaban,” Harry is saved when a mysterious figure summons the Patronus of a stag to drive off a group of attacking Dementors. One trip through time later, he finds out that it was him who summoned that Patronus. And in “Game of Thrones” [spoiler alert for season six], Bran discovers that his acts in the present were responsible for Hodor’s unique speech impediment forming in the past (we won’t go into “how” since we’re trying not to break down at work today).

Here’s the thing about the Grandfather Paradox: It’s only a paradox in certain versions of the space-time continuum. And until we actually succeed in going back, we’re not going to know exactly how our continuum works. But here are a few possibilities.

This is how the timeline shaped up in that episode of “Futurama,” and it’s the version that Novikov’s principle most clearly addresses. In this version, what’s past is past. “The ink is dry.” So when Fry thought that he had altered the timeline forever by leading his grandfather to his death, he was actually just playing out how the timeline had already went … which happened to mean that he turns out to be his own grandpa. Ick. Moving on …

This is probably the most popular conception of how timelines work, even though it doesn’t really make a lot of sense when you think about it. It’s the kind of time travel that Marty McFly had to deal with. For him, the changes he made to the past were reflected in the present, which is how he nearly erased himself from existence by being more charming than his youthful father. But if the present changes when you change the past, then won’t you change too? And if you accidentally erase yourself from existence, then you won’t really have a chance to set it right. This is where paradoxes thrive, and where sci-fi writers just have to shrug and admit it’s more dramatic that way.

This is the kind of timeline that goes down in the “Star Trek” reboot, and it conveniently sidesteps any potential paradoxes by saying that every trip to the past creates a new reality wherein that trip to the past occurred. The past of the reality you left behind is still set in stone, like a fixed timeline, but the new reality you’ve created can play out in any number of different ways. So Eric Bana’s villainous Nero didn’t have to worry about causing any paradoxes since the universe he was affecting didn’t have anything to do with the universe he came from. Sort of a “what happens in Vegas, stays in Vegas,” but with even more lasers.

Olbers’ Paradox asks the question: If the universe is filled with infinite stars, then why isn’t the night sky as bright as the sun? If the universe really extended to infinity, then there should be infinite stars. That would mean that every point in the sky should have a star in it, so the sky should be bright. Obviously, the night sky is dark, but for centuries, the reason why was a little bit of a conundrum — in other words, a paradox. 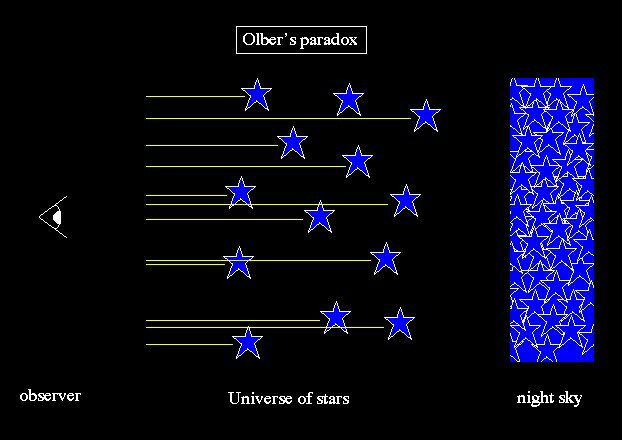 We can trace the origins of this paradox all the way back to Johannes Kepler in 1610, though it wasn’t popularized until the 19th century by another German astronomer named Heinrich Olbers — thus, the name. Clearly, scientists have been pondering this question for centuries and now, they know the answer. Here are six possible solutions to the paradox, some more correct than others.

1) DISTANT STARS ARE DIMMER THAN NEARBY STARS

First up: Maybe the sky isn’t uniformly bright because more distant stars are dimmer than those closer to us. Unfortunately, the paradox accounts for that. It says that if you take a given nearby star and look 10 times further out in the sky, you’ll see 100 more stars sitting in that exact same vantage point. Even though they’re dimmer, there are enough of them shining together to make up for their lack of brightness. If you’re dealing with infinite stars, every point in the night sky should be the same brightness as every other point.

What if cosmic dust is just obstructing parts of the sky and creating the illusion of darkness here on Earth? That’s a nonstarter. Cosmic dust that could block or absorb the light energy from distant stars would start to heat up and glow itself. That’s why nebulae glow when they don’t have any internal energy source.

3) THERE AREN’T AN INFINITE NUMBER OF STARS

Now you’re getting somewhere. Still, it doesn’t technically solve the paradox. The universe could have a finite number of stars and still have enough to leave the night sky fully illuminated. Astronomers currently estimate there are about 100 billion stars in the Milky Way alone and roughly 10²⁴ stars in the entire universe. While that number isn’t infinite, it’s enough that it doesn’t explain the paradox.

4) THERE IS’NT A UNIFORM DISTRIBUTION OF STARS

Maybe stars are grouping together and forming clusters that look like singular stars in the night sky. This solution could be correct. There’s no reason to think that stars would be evenly distributed and maybe they do clump together, leaving large chunks of sky totally dark.

However, in the frustrating words of math teachers everywhere, that answer isn’t the most correct.

5) THE EXPANDING UNIVERSE RENDERS THE MOST DISTANT STARS INVISIBLE

In 1929, Edwin Hubble discovered that the universe is expanding. That meant that it was smaller in the past, which meant that the universe is finite. Part of the way Hubble made this discovery was by measuring the redshift of distant galaxies. Just like the pitch of a siren gets lower as it moves away from you, the wavelength of light gets longer as an object moves away from you — that is, it moves into the infrared area of the electromagnetic spectrum. The furthest galaxies are moving away from us fastest, so their light has been redshifted so far that they’re no longer visible to the human eye. This is one of the most correct solutions to Olbers’ Paradox.

These two final propositions — redshift and a young universe — are the most likely solutions to Olbers’ Paradox. The next time you look up at the night sky, take a moment to not only marvel at the beauty of the stars you can see, but also wonder about the beauty of those you can’t.